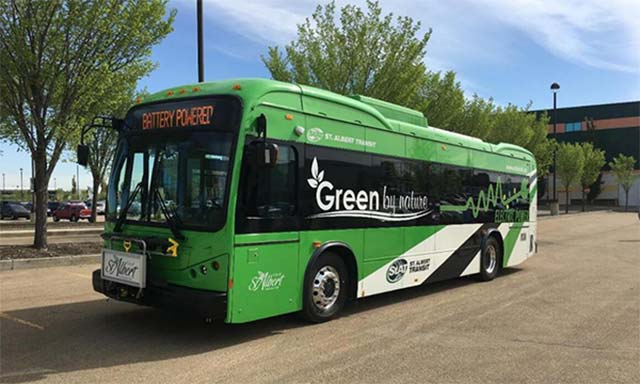 St. Albert in Canada’s oil producing province of Alberta has launched three BYD K9S electric buses as part of the provincial government’s move to broaden its public transportation network sustainably. Four more electric buses are scheduled to hit the streets of St. Albert by the end of the year.

Last year the City of St. Albert became the first municipality in Canada to order long endurance electric buses for public transit use. Each bus is capable of travelling between 250 to 280 kilometers (155 to 174 miles) on a single charge.

BYD’s K9S is well suited for Alberta’s extreme winter where temperatures can fall to as low as -35C. The vehicle’s technology that was previously tested in Copenhagen and Alaska went head to head with two brand new diesel buses in winter last year. The competition in the Canadian city of Edmonton proved that electric buses are more reliable in the extreme cold. Edmonton is also pushing for electric buses to take up a larger proportion of its network.

The buses that cost 970 thousand Canadian dollars each are part of the province’s Green Transit Incentives Program, a scheme to support new and existing public transport infrastructure technology. The project’s ultimate aim is to reduce the number of vehicles on the province’s roads and lower greenhouse gases.

“It’s a historic moment for Canadian transportation and the environment,” said the province’s Minister of Transportation and Infrastructure Brian Mason, who cut the ceremonial ribbon and was given the honor of the first drive.

BYD Canada Vice President Ted Dowling said the introduction of the 10.6 meter long battery powered buses were exciting. “Many more Canadian cities and provinces will be under pressure to buy electric buses soon because they cannot be led by the oil province.” Alberta has the world’s third largest oil reserves.

Provincial and federal politicians in Canada have actively promoted green transport solutions in the country as part of the country’s commitment to mitigating climate change.