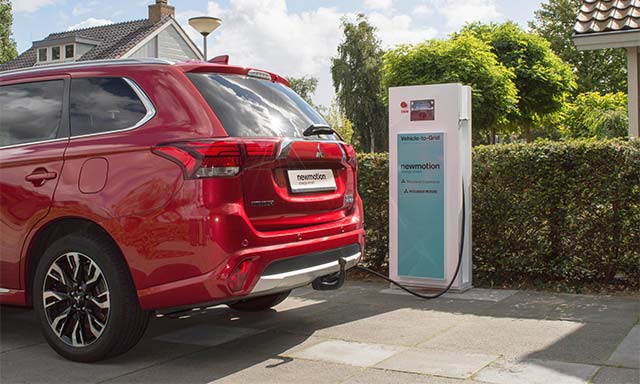 NewMotion – one of Europe’s biggest providers of smart charging solutions for electric driving – announces the implementation of a bi-directional loading pilot, also known as ‘Vehicle to Grid’ (V2G).

With V2G-technology, peak demand on the electricity grid can be better balanced, by allowing electric vehicles to not just take power from the grid, but also return it to the network. NewMotion joins forces with Mitsubishi, and grid operator TenneT using V2G chargers from Enel and grid services and technology from Nuvve. The pilot features the popular Mitsubishi Outlander PHEV.

NewMotion-CEO Sytse Zuidema: “There is a shift towards more and more renewable energy such as wind and solar, but both sources are still too dependent on the weather and therefore variable and volatile. With V2G-technology, we turn parked electric vehicles – at home and at work – into power service providers and energy buffers. They can save a surplus of energy and return energy to the grid at a peak time. This results in more stability and security.” Every Mitsubishi Outlander PHEV and its battery already has the capability to utilise a V2G charge point. Zuidema: “Mitsubishi Motors Corporation is a real frontrunner by embracing V2G and using the technology in its PHEV. Together with our partners we want to show that V2G is easy to implement and can make a huge difference to the electricity grid as well as electric vehicle user’s wallets.”

TenneT is a leading European electricity transmission system operator and is responsible for balancing the Dutch electricity system. TenneT is facilitating the energy transition.

TenneT CEO Mel Kroon: “Volatility increases with the growing electricity production from renewable sources. Supply and demand must always be in balance. Therefore, TenneT is looking for new decentralised sources to provide flexibility. This pilot project is part of a broader strategy and portfolio of pilots preparing the electricity system to accommodate the growing volume of renewable energy.” California-based Nuvve developed the Grid Integrated Vehicle platform GIVe™, which controls the power flow to and from electric cars, ensuring that the driver’s mileage needs are always met and which optimises the power available to the grid. It is a leading company in V2G deployments and ensures the delivery of ancillary services to Tennet. Gregory Poilasne, Nuvve’s CEO says: “We are excited to start performing bidirectional V2G frequency regulation services for TenneT. We expect regulations and legislation in Europe to change in favor of distributed resources on the grid and these kind of projects are key in changing mindsets and making sure that EVs are integrated to the grid.”

“With V2G technology, we not only encourage the use of renewable energy sources, but also introduce a potential earnings model for electric drivers,” adds NewMotion’s Zuidema. By making electric vehicles a source of energy, owners could eventually ask for financial compensation from their energy supplier. “With our partners, we are currently investigating how individuals can not only make an obvious contribution to the environment by reducing CO2 emissions, but also earn money. We are part of an energy revolution in the field of electric driving.”

NewMotion, with its headquarters in Amsterdam, is pioneer in charging electric vehicles in Europe. It has a European network of over 50,000 charge points and there are over 100,000 charge cards in circulation. Last week, NewMotion was acquired by Shell. Under the terms of the deal, NewMotion will continue business as usual as a wholly owned subsidiary of Shell. Both companies will work together to maximise the synergies and opportunities on offer.