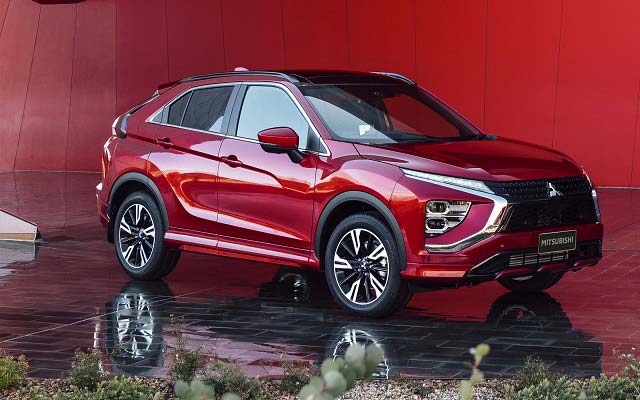 Mitsubishi Motors has launched the ECLIPSE CROSS plug-in hybrid and gasoline models in Japan. The new, redesigned model will be the second PHEV in the Mitsubishi lineup, marking the company’s dedication and investment in PHEV technology.

Launched globally during MITUSBISHI MOTORS’ 100th anniversary in 2017, the ECLIPSE CROSS boasted a stylish coupe shape and dynamic power, epitomizing the essence of Mitsubishi cars. The redesign takes SUV dynamics to a new level, while achieving a graceful, flowing form. For the first time, the company introduces a new PHEV variant which incorporates the twin-motor 4WD system from the OUTLANDER PHEV, the world’s top-selling PHEV.

MMC started taking pre-orders for the new ECLIPSE CROSS from mid-October in Japan, and already doubled the original sales target, reaching about 2,000 units in six weeks.

“We aim to provide customers around the world with exciting products that also offer peace of mind, by improving on our trademark eco-friendly technologies while also taking our 4WD technologies to the next level,” said Takao Kato, CEO of MITSUBISHI MOTORS CORPORATION. “On the strength of both our pioneering PHEV technology and the 4WD expertise we have built through rally experience, we have infused the Mitsubishi essence in this redesign. The new ECLIPSE CROSS is an ideal partner for drivers who want to do more with their car, and to seek new challenges. At MITSUBISHI MOTORS, we are also committed to helping to achieve a sustainable environment by putting our EV and PHEV technologies into broader use. By 2030, we will raise the proportion of electrified vehicles in the total sales to 50%, with a focus on PHEVs such as this new model.”

Distinctive design that inspires drivers to be more active

Developed under the design concept Daring Grace, the extended length of the body and restyled front and rear design create a sleek, classy look with enhanced SUV dynamism in both front and back.

The front end adopts an evolved version of Dynamic Shield, expressing the powerful performance of an SUV with the security to protect people on board. Its refreshed light layout completes the front design with a sharp, sporty look. Skid plates at the bottom of both bumpers add to the powerful SUV presence.

The elegant yet sporty form continues to the rear. Designers have updated the double rear windshield from the previous model to a single windshield for a sleek styling and graceful shape, at the same time giving a clearer rear visibility. ECLIPSE CROSS’ iconic three-dimensional taillights are placed at a higher position for a distinctive look that is also easy to see on the road. The heavy-duty body panels and bumpers project firmness and strength, while combining with the hexagon design reminiscent of a rear-mounted spare tire to express the ruggedness and road handling of an SUV.

Inside the cabin, high-end trim levels are given a new black interior with seats made of a combination of embossed suede-based materials and synthetic leather, while the manufacturer’s option of leather seats are now available in light gray in addition to the conventional black. Door trims also coordinate with the car seat color for a high-quality, sporty interior space.

MMC’s trademark high-luminosity Diamond Color series offers two color options for body color – Red Diamond and the new White Diamond. The latter is a shade that radiates both the white sheen of a pearl and the subtle nuance of metal, reflecting an energetic yet glamorous, mature elegance.

The ECLIPSE CROSS used a modified twin-motor 4WD PHEV system from the OUTLANDER PHEV. The architecture consists of one front and one rear high-power electric motor, a large-capacity drive battery and a 2.4-liter MIVEC engine, allowing for the quick, silent, yet powerful acceleration unique to electric vehicles along with nimble yet stable handling.

The drive battery is 13.8 kWh with an all-electric range of 57.3 km (WLTC Mode), allowing pure electric driving for most of daily commute. There are three driving modes: EV Mode drives with the electric motors using power from the drive battery, Series Hybrid Mode uses gasoline engine to generate power for the electric motors which drive the vehicle, and Parallel Hybrid Mode uses gasoline engine to drive the vehicle assisted by the electric motors. Automatic switching between these modes according to driving conditions allows drivers to feel the driving pleasure of motor drive in a variety of environments.

The 100-volt AC on-board outlet with a maximum 1,500 watts can supply power to electronics and appliances for outdoor leisure and as a reliable source of electricity in an emergency. The vehicle can also serve as a rechargeable battery that powers an entire household with its stored energy by connecting a V2H device to the quick-charging port. Since the vehicle can generate its own power, it can supply up to 10 days of power to a general household when fully charged and fueled.

Four-wheel control for responsive driving feel with peace of mind

High-rigidity body and optimized front and rear suspension make the S-AWC (Super-All Wheel Control) even more effective, resulting in an improved handling that is true to the driver’s intent, and a more comfortable, quieter ride.

The PHEV model employs the S-AWC system on the twin-motor 4WD that can freely distribute driving force to the front and rear electric motors without transmission loss. Utilizing electric vehicles’ characteristic high response, high precision, and high degree of freedom, the system exercises a high level of vehicle’s control on driving, cornering, and braking. Engineers also optimized the front-rear weight distribution on the ECLIPSE CROSS and lowered its center of gravity by positioning the high capacity drive battery under the center of the floor. This gave it an even more comfortable ride, with superior steering stability.

The gasoline model has the S-AWC system which integrates Active Yaw Control (AYC) to adjust braking force between the front left and right wheels for sharper cornering, as well as an Anti-Lock Brake System (ABS) and Active Stability Control (ASC) to regulate braking force on an electronically-controlled 4WD base that distributes torque optimally between the front and rear wheels. Integrated control of these systems produces highly stable vehicle behavior that is true to the driver’s intent. Coupled with optimizing the suspension, the ECLIPSE CROSS provides stable and precise handling in daily life and improved handling on slippery roads.

Driver can select different driving modes of the ECLIPSE CROSS according to road and driving conditions. Normal Mode provides the appropriate steering and stability for a broad range of driving scenarios. Snow Mode maintains stable vehicle movement on slippery surfaces such as snowy roads. Gravel Mode generates superior road handling and stability on poor surfaces. The PHEV model also has Tarmac Mode, which delivers an even higher level of cornering and stability mainly on dry, paved surfaces for drivers to feel the joy of driving with extra peace of mind.

New smartphone link navigation offers convenient features including route navigation via built-in maps and compatibility with VICS traffic information. Apple CarPlay – the smarter, safer way to use your iPhone while you drive comes standard on all models. Android AutoTM – an easier way to use apps from your Android phone while on the road is also available on all models. The display screen has also been enlarged to 8 inches, making it clearer to see and operate.

Dec 8, 2020Blagojce Krivevski
22 fully electric MAN Lion’s City E buses will be cruising the streets of Malmö from 2021‘Green number plates’ will boost EV demand ahead of 2030 deadline, according to Nissan poll