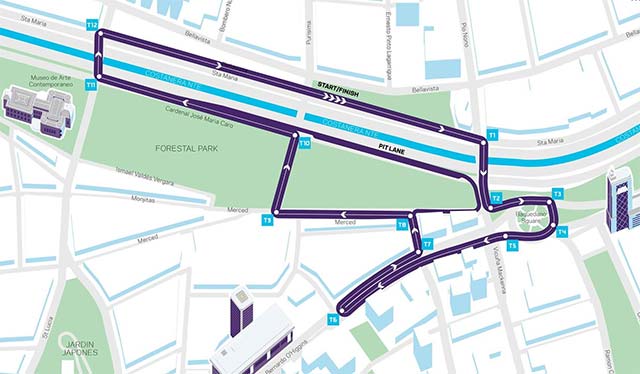 The fully-electric Formula E car hit the streets of Santiago for the first time as the Chilean President, Michelle Bachelet welcomed the electric street racing series ahead of the inaugural Antofagasta Minerals Santiago E-Prix on February 3 – round four of the 2017/18 FIA Formula E Championship.

The Formula E car toured around the capital, catching the eye of commuters on their journey to work – making a pit-stop at La Moneda Palace and O’Higgins Park, with home-hero Eliseo Salazar behind the wheel.

The former Formula 1 and IndyCar driver gave Santiago their first taste of the all-electric single-seater followed in convoy by vehicles supplied by BMW i – Official Vehicle Partner of Formula E – completing a number of runs along O’Higgins Park Ellipse in front of fans and students from DUOC.

In addition to the street demonstration, the exact location and track layout was unveiled in front of an audience of local authorities, key dignitaries and media. The Formula E drivers will line-up on the grid along Avenue Santa Maria – navigating their way around Parque Forestal, against the backdrop of Cerro San Cristobal and Santa Lucia Hill.

The 2.47 km circuit – subject to FIA track homologation – consists of 12 turns, crossing the River Mapocho and through Plaza Italia.

Having hosted the Grand Prix in 1950 – when racing legend Juan Manuel Fangio took the chequered flag – Round Four of the Formula E Championship will be the first time Santiago has seen all-electric single-seaters take to the city’s streets.

Alberto Longo, Co-founder & Deputy CEO of Formula E, added: “It’s an honour to join President Bachelet for the first appearance of Formula E on the streets of Santiago. For the people of Chile, it’s the first time they’ve seen and heard the fully-electric car in their home city. The racing and competition this year is going to be closer than ever and we can’t wait to see the drivers battle it out around this new and challenging circuit in February. South America is steeped in motorsport history and tradition – and Formula E will make its own history in Chile for many years to come, starting this coming season.”

Pablo Squella, Minister of Sport, said: “Formula E in Chile is undoubtedly the materialisation of an effort by the Government of President Michelle Bachelet that demonstrates the commitment we have to sports, supporting this worldwide event. We need Chilean citizens to be motivated to practice sport and do physical activity, and what better way than bringing world-class shows, and the best drivers in the world, to Santiago. We invite everyone to join this party to start learning about Formula E and electric cars, because in February we want a motivated Santiago, a city that welcomes everyone with great enthusiasm. We will be a great host country and we will make the fourth round of Formula E, into a new sporting tradition for our country.”

Andres Rebolledo, Minister of Energy, said: “Hosting Formula E in Santiago is part of the ‘Electric Mobility Strategy in Chile’, soon to be released. This race will allow the benefits of electric vehicles to be known by the Chilean people. A third of the energy consumed in Chile is from the transportation sector, using oil imported practically 100 per cent from abroad. It also represents 20 per cent of CO2 emissions. Our projection says that if we generate the necessary regulatory, logistics and market conditions, in the year 2050, 40 per cent of the vehicles in Chile will be electric, saving the country $3,300 millions of dollars annually and avoiding 11 million tonnes of CO2.”OK

Ivan Arriagada, CEO at Antofagasta Minerals, said: “We’re proud to sponsor this world-class event that will debut this February in Chile, as we believe that copper plays a key role in achieving a more sustainable world like the one we all dream of. Not only do you find it in emissions-free electric vehicles, but also its intensively used in the growing presence of non-conventional energy sources, like the wind and sun. We believe that Formula E contributes to promoting the use of electric vehicles, which not only improves the outlook for the copper market, but contributes to a cleaner world, by concretely helping to decontaminate our cities.”