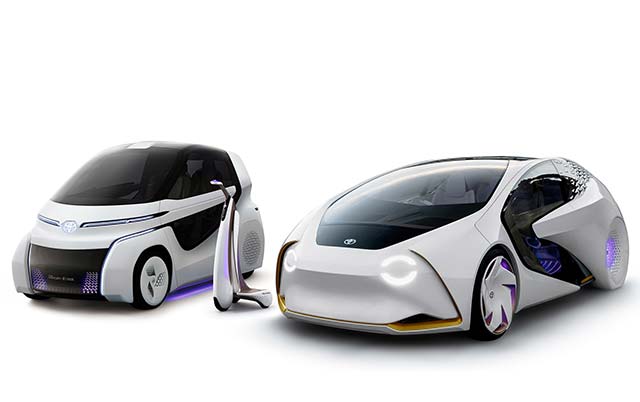 Toyota today announced an outline of the concept car TOYOTA Concept-i series that embodies the future vision of a mobility society through which artificial intelligence (AI) enables cars to understand the driver, effectively allowing people and cars to become partners.

They are expected to be exhibited under the theme of “Let’s move the world from here. Beyond the Motor” at the 45th Tokyo Motor Show 2017, which will be held at Tokyo Big Sight for 12 days from October 25 through November 5.

Toyota has infused each era with irreplaceable excitement such as “freedom and joy of mobility” based on the idea that cars are among the manufactured goods that are preceded by the word “beloved.” The TOYOTA Concept-i series aims to become a “beloved car” of a new era guided by the concept of “more than a machine, a partner” to better understand the driver and grow together with the driver as an irreplaceable partner.

In order to provide new experiences and excitements to more people based on the idea of “freedom and pleasure of mobility for all,” a universal small mobility vehicle has been added to the TOYOTA Concept-i series so that anyone can have freedom of mobility, including wheelchair users and the elderly. Additionally, a pedestrian zone mobility vehicle has been added to the series to enable free movement in the same space as pedestrians.

The AI Agent, which understands people, is able to disengage and re-engage with the driver across the vehicles in the series, thereby supporting seamless mobility and being together with the driver to achieve safe and fun mobility.

Concept-i estimates emotion and level of alertness by reading the driver’s expressions, actions, and tone of voice in a complex manner. It compares general information such as news on the web with information on individuals such as social media activity, GPS information, and conversation history in the car, and estimates the driver’s preferences based on re-occurring topics that arise.

Technologies such as deep learning are used for the technology that understands people (LEARN), such as measuring emotions and estimating preferences. Based on this technology, the TOYOTA Concept-i series provides value innovation in the areas of safety and peace of mind (PROTECT) and new Fun to Drive experiences (INSPIRE). 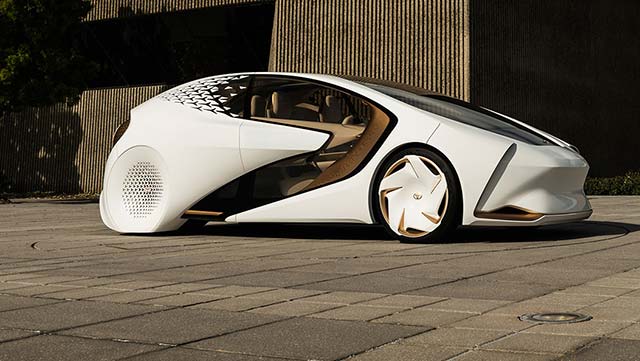 In addition to the car’s external conditions, Concept-i estimates the driver’s condition using technology that understands people, and monitors the reliability of the driver and the car. For example, if the car’s reliability is high and car support is deemed necessary, such as a situation in which the driver is overcome by a dangerous or high-stress situation, Concept-i switches to automated driving. Based on Toyota’s “Mobility Teammate Concept” for automated driving, which aims to both watch over and assist drivers as needed, Concept-i guides with safety and peace of mind.

Furthermore, it supports the driver by stimulating the five senses, including vision, touch, and smell depending on the driver’s emotion, degree of fatigue, and level of alertness to rouse drivers into an alert state when they feel drowsy, and to help drivers experiencing higher levels of stress feel more relaxed.

Concept-i engages in conversation based on the emotions and preferences of the driver. The car suggests topics of interest based on the mood of the driver, achieving a completely new style of two-way free conversation. In addition, it creates an “Emotion Map” by periodically mapping the driver’s emotion and GPS data. By collecting data on individual emotions and using this information as big data, the TOYOTA Concept-i series can deliver fresh experiences by suggesting new, enjoyable routes as slight detours.

The vehicle design comprises a cabin with a forward projecting futuristic silhouette and a simple and open interior, and starting from the Agent located at the center of the instrument panel, the design theme flows from the inside out with seamless styling in which the design of the instrument panel continues to the body exterior. In addition, it provides a new user experience through intuitive HMI interaction with the Agent using a 3D-HUD (head-up display).

Toyota plans to have the TOYOTA Concept-i on the road by around 2020 and conduct road tests of vehicles equipped with some of the concept car’s functions from this exhibition in Japan. 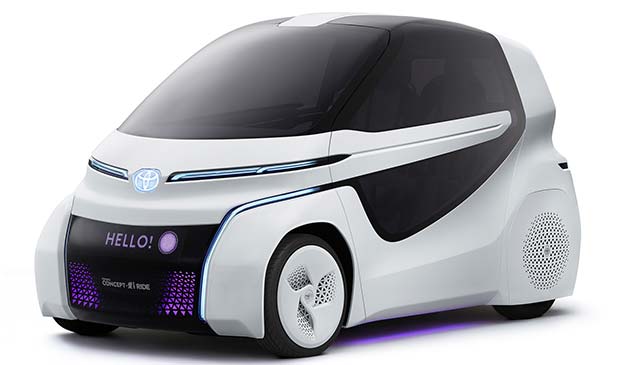 In addition, a joystick is used, eliminating the steering wheel, accelerator and brake pedals, and the vehicle size enables wheelchair users to park and enter/exit a common parking space for one vehicle, with emphasis placed on easy operation while driving, and stopping or parking.

Moreover, the AI Agent, which is a feature of the TOYOTA Concept-i series, is positioned on the large-size display of the instrument panel and actively provides information that supports and enhances outings, such as the provision of information on barrier-free facilities. 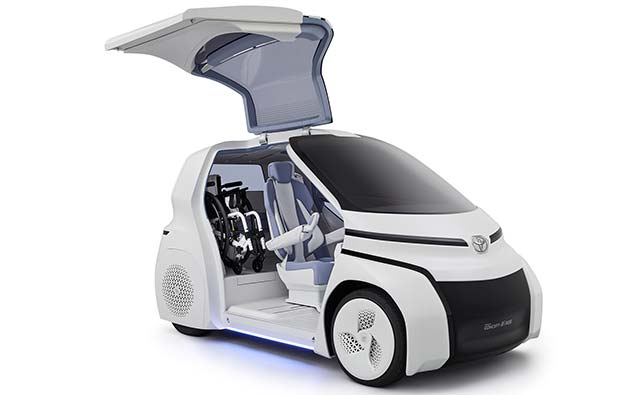 The driver’s seat is positioned at the center when driving3. While parking and stopping, driving assistance functions such as automated parking and automated valet parking, are employed, allowing anyone, including not only wheelchair users but also elderly people, to drive safely with peace of mind.

Toyota also envisions the use of sharing services with the TOYOTA Concept-i RIDE. By sharing with many people access to universal mobility, which is currently accessible mainly on an individual ownership basis, Toyota aims to provide convenient mobility that can easily be used and accessed by anyone. The TOYOTA Concept-i RIDE provides safe, convenient, and enjoyable movement even at outside locations, using the AI Agent to disengage and re-engage with the driver across the vehicles in the series, thereby being together with the driver. 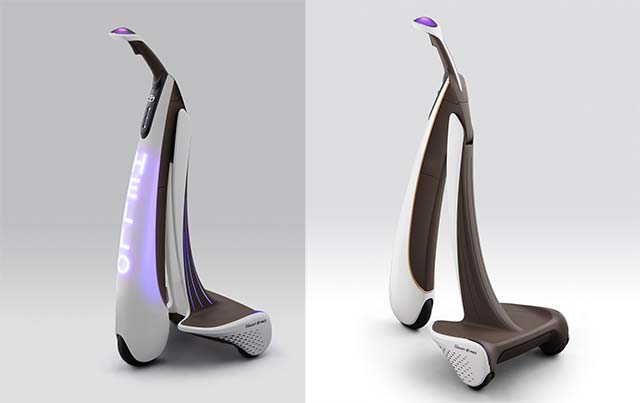 It is possible to rotate on the spot within a length less than a person’s stride and width less than a person’s shoulder width. It is a compact vehicle taking up space equivalent to that of a pedestrian while walking. It also understands the driver based on conversation with the Agent and data obtained from sensors in the handles and guides the driver to a safe state depending on the situation. If the vehicle senses danger while driving, it will actively warn the driver and automatically take avoidance measures. Furthermore, three wheels and a wheelbase variable mechanism that corresponds to speed are used, thus ensuring stability when stopping and driving.

By using a steering function, riders do not need to operate the TOYOTA Concept-i WALK by shifting their body weight, which enables anyone to operate it easily. Thanks to the lowered floor, people can get on and off easily and ride without being restricted by their age, gender, or clothing, such as elderly people or women wearing skirts.

With the TOYOTA Concept-i WALK, Toyota envisions sharing services that take advantage of the characteristic of the “AI Agent” to disengage and re-engage with the rider across the vehicles in the series, thereby being together with the riders. The aim is for a mobility vehicle that can be used as part of short distance movement in coordination with other transportation facilities, such as use at outside locations and when walking around sightseeing spots.