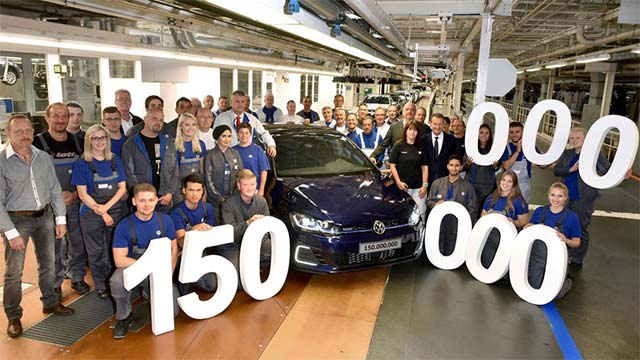 Volkswagen was founded more than 80 years ago. Since then, 150 million vehicles, including icons such as the Golf or the Beetle, have been built around the world at more than 50 production sites in 14 countries.

The 150 millionth vehicle—a blue Golf GTE plug-in hybrid—rolled off the assembly line in Wolfsburg on Thursday.

In 2017 alone, Volkswagen is launching over 10 new models worldwide. There will be 19 new SUVs in total by 2020. The I.D. family with the new electric architecture (MEB) then marks the start of the Volkswagen brand’s electric offensive from 2020. One million electric Volkswagens are to hit the road by 2025. Technological digitalization, increasing connectivity and sensor technology bring entirely new perspectives.

The series production of the Volkswagen brand began on December 27, 1945 with the Type 1 Käfer. In the post-war era, it was the Volkswagen Beetle that initially shaped the automobile industry. All in all, 21.5 million of this much-loved small car were built before production finally came to an end in Mexico in 2003.

The Volkswagen Golf topped the Beetle record. The 25 millionth Volkswagen Golf left the assembly line in Wolfsburg in 2007, by 2013 the number had already risen to 30 million. Today, Volkswagen produces the bestselling Golf in the seventh generation and has already built more than 34 million worldwide. For decades, the Golf has been the yardstick in the compact segment.

The Volkswagen brand’s product portfolio currently includes more than 60 models worldwide. Apart from the Beetle and the Golf, more than 20 million Passat, some 19.5 million Jetta and almost 17 million Polo have been produced.

The workforce at the main plant in Wolfsburg in particular has made a key contribution to this anniversary, building over 44 million vehicles since production began some 72 years ago.