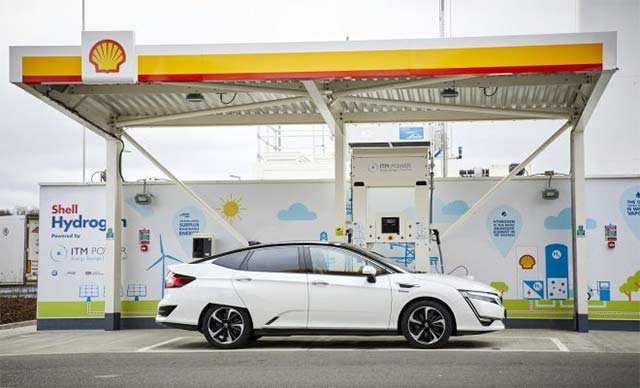 Energy storage and clean fuel company ITM Power is to unveil a series of designs for large scale hydrogen refueling stations, capable of producing up to 20 tons of hydrogen per day.

The large scale refueling station designs, which will be launched at the Hydrogen + Fuel Cells North America exhibition in Las Vegas next month, are based around electrolyzer configurations of up to 50MW in size with the capability to produce up to 20 tons of hydrogen per day.

This is in response to industry demand for larger scale industrial installations for refueling heavy logistics vehicles, such as road haulage vehicles, ships and trains.

Separately, ITM Power announces a significant increase in its order pipeline of £4.87m, which has been added over the last two weeks. The Company currently has £23.54m of projects under contract and £16.67m of contracts in the final stages of negotiation, totaling £40.21m (subject to exchange rate variation).

ITM Power CEO, Dr. Graham Cooley, said: “These new refueling station designs are being launched in response to a dramatic increase in the number of enquiries for refueling heavy logistics vehicles at large scale as the viability of hydrogen power continues to gather scale and momentum across a growing number of industrial applications. ITM Power is delighted to be in a prime position to support these important transportation sectors as they plan their transition to a greener vehicle fleet to reduce emissions. Air quality and fossil fuel emissions is now a high priority for governments worldwide.”

In a related news, last month ITM signed a fuel contract with Honda UK for the purchase of hydrogen at £10/kg across the company’s hydrogen refueling network.

ITM Power is currently rolling out a network of 10 hydrogen refueling stations in the UK of which four are now open for public access – at Rotherham, Rainham, Teddington and Cobham. Each station produces hydrogen on site via ITM Power’s rapid response electrolyzer system, and can refuel a fuel cell electric car in three minutes, providing 300 to 420 miles of clean emission driving.

The refueling network has been financially supported by Innovate UK, Office for Low Emission Vehicles (OLEV) and the Fuel Cells and Hydrogen Joint Undertaking (FCH JU).

According to ITM, the Honda contract is its 17th fuel supply arrangement for refueling fuel cell electric vehicles.

Aug 9, 2017Blagojce Krivevski
July 2017 plug-in sales in The NetherlandsPorsche Panamera PHEV was No.1 plug-in model in Belgium in July