The third Formula E season so far: the final chapter 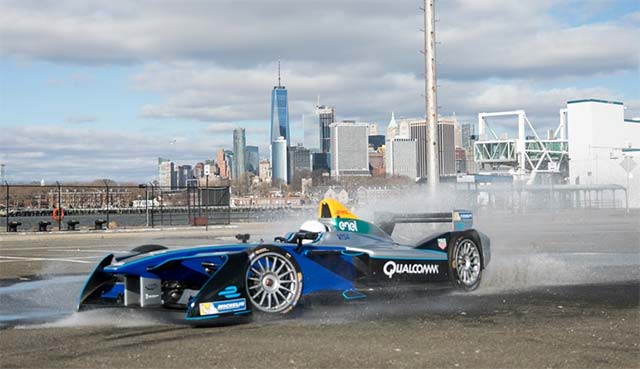 The inaugural Hydro-Quebec Montreal ePrix brings the curtain down on the 2016/17 Formula E season.

The third instalment of the all-electric street racing series brought about the arrival of two new teams and a host of new tracks and drivers, but heading onto the finishing straight it’s two of the series’ most experienced drivers and two of its stalwart teams that are advancing towards the silverware.

The tone was set in the season opener in Hong Kong. The race was won by Renault e.dams’s defending champion Sebastien Buemi, while despite having to pit for a new nose following a first-lap crash, the Abt Schaeffler Audi Sport team deployed a bold strategy that Lucas di Grassi executed perfectly to take second.

Buemi kept up his perfect start to his title defence with a solid win in Marrakesh, while he made it a hat-trick in Argentina after a race-long fight with di Grassi and the TECHEETAH of Jean-Eric Vergne.

A poor qualifying and subsequent spin as he tried to battle back through the field meant Buemi’s run of wins ended in Mexico City and fittingly it was di Grassi who profited. In the most improbable of circumstances, di Grassi recovered from having to pit for a broken rear wing to be replaced, while the team opted for a very aggressive energy strategy during a mid-race Qualcomm Safety Car period.

A later safety car period erased di Grassi’s lead and it appeared that the jig was up, but with Jerome D’Ambrosio’s robust defence of second unwittingly coming to his aid, di Grassi was able to hold on for a hard-earned win.

Buemi’s response was emphatic, reeling off back-to-back wins from pole position in commanding style in Monaco and Paris. When di Grassi crashed out of the latter, it seemed as if Buemi had established an unassailable lead.

But tweaks to the car’s set-up in Berlin didn’t work as desired and from a season low 14th place on the grid, Buemi recovered to fifth in the race, only for his car to fail post-race checks. His disqualification brought to an end a remarkable run of point-scoring races that dated back to Long Beach, midway through Season 1.

It didn’t take long for his winning ways to return, however, as an unfortunate unsafe release penalty prevented Felix Rosenqvist from adding to his Race 1 win in Berlin and instead allowed Buemi to taste the winner’s champagne for the sixth time in the season.

Di Grassi was a solid second in the opening race in Berlin and a distant third in the second outing. But with Buemi having to miss the New York races owing to a clashing World Endurance Championship commitment, the opportunity was there for him to reduce or even remove Buemi’s points lead.

Sam Bird and DS Virgin Racing smashed the New York ePrix, winning both races. It kept Bird in with a mathematical chance of the title but also opened old wounds and the regret of his second car dying as he went to leave the pits in Hong Kong having pitted from the lead.

Second place in the second race also kept Rosenqvist in with a vague title chance, but he too could reflect on the opportunities lost, not least the unfortunate late (and unavoidable) collision with his Mahindra team-mate Nick Heidfeld in Mexico and the mistake in qualifying for Race 1 in New York that left him 17th on the grid when he should have been in Super Pole.

Unusually di Grassi was never really in podium contention in New York, but it would be wrong to cast his fourth and fifth place finishes as a failure. Only Bird scored more points across the two races, and while he’d most assuredly prefer to go into Montreal with a 10-point lead rather than a 10-point deficit, Buemi can by no means afford to relax and assume the hard work has been done.

His team-mate Nico Prost is the only driver to have score points in every race this season, but the Renault e.dams driver is yet to make an appearance on the podium and his slim title hopes were ended in New York.

Nick Heidfeld has been third five times for Mahindra so far this season, including in the second New York race, but so far a win is proving elusive. Only one driver has stood on the Formula E podium more times than Heidfeld without winning a race and that’s Vergne.

The pace of the TECHEETAH package has been strong all season (although it did struggle in Berlin), but for a variety of reasons it has not been able to convert that pace into a win. However, it recorded its best result so far as Stephane Sarrazin scored only his second Formula E podium as he and Vergne finished second and third in the opening New York race.

Jose Maria Lopez was an excellent second for DS Virgin in Paris and has enjoyed a strong rookie season, while his replacement in New York (like Buemi he had a WEC clash) Alex Lynn did a stunning job to set pole position on his debut.

Nelson Piquet and Oliver Turvey both recorded their maiden series pole positions as NextEV found its form in qualifying – although strong race results have been harder to come by. While Pierre Gasly – Buemi’s understudy in New York – is currently 14th in the standings after a very impressive debut in New York, during which he recorded the unofficial fastest lap and finished in eighth and fourth places.

Mitch Evans has scored the majority of the points for the Panasonic Jaguar Racing team during a trying debut season, while the battle between Jaguar, Venturi, Faraday Future Dragon Racing and Andretti to avoid the wooden spoon in the teams’ standings has been a fascinating subplot.

How will it all end? You’ll have to tune in of Saturday and Sunday (both races start at 4pm local time) to find out.