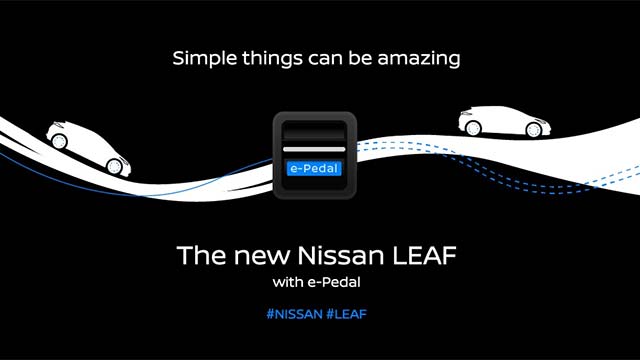 Nissan announced today that the next-generation Nissan LEAF will come with e-Pedal, a new technology that according to the Japanese carmaker transforms the way we drive.

With the flip of a switch, the technology turns your accelerator into an e-Pedal, allowing drivers to accelerate, decelerate and stop using just the e-Pedal.

e-Pedal technology is the world’s first one-pedal operation that allows drivers to bring the car to a complete stop even on hills, stay in position, and resume driving instantly.

Drivers can cover 90% of their driving needs with the e-Pedal, making the process of driving more exciting. In heavy traffic and during city commutes, drivers will greatly reduce the need to shift from one pedal to the other, making your drive simpler and more engaging.

“The e-Pedal technology represents another key milestone in Nissan’s ongoing commitment to bring accessible, advanced driver assistance technologies to the mainstream. Set to make driving safer and more enjoyable, the development of these technologies is part of Nissan Intelligent Mobility, the company’s blueprint for transforming how cars are driven, powered and integrated into society,” Nissan said in a statement today. 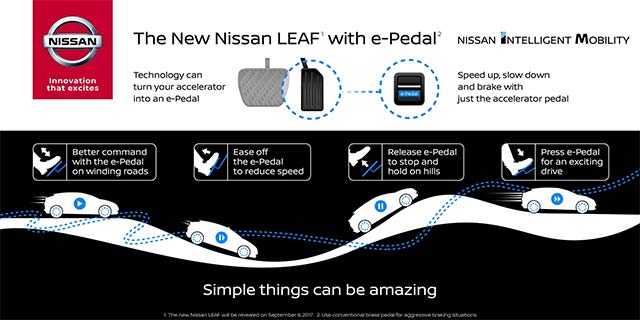 The next-generation Nissan LEAF will be the first vehicle in the automaker’s global product line-up equipped with ProPILOT Park – the technology helps drivers park by automatically guiding the car into a parking spot.

Today the Nissan LEAF is the world’s best-selling electric vehicle, with more than 277,000 sold worldwide.