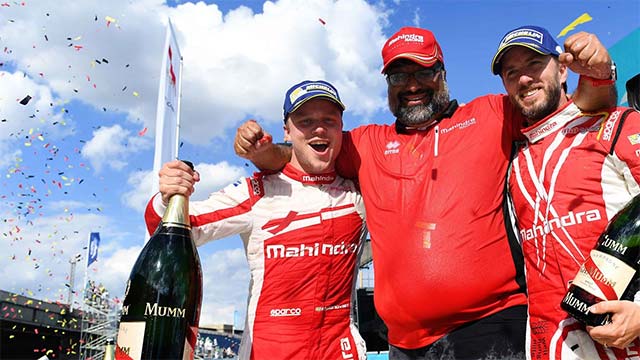 Mahindra Racing enjoyed its most successful ever event in Formula E at last weekend’s Berlin ePrix.

Felix Rosenqvist made history by taking the team’s first Formula E win in Saturday’s race, and only a time penalty for an unsafe during the pitstop in race two prevented the Swede from making it a double win.

Formula E is Mahindra’s first foray into international car racing as manufacturer. It has been involved in the in 125cc/Moto 3 class of the FIM World Motorcycle Racing Championship since 2011, and has also sponsored teams at various levels of NASCAR.

It started its life in Formula E strongly, with Karun Chandhok qualifying fourth and finishing fifth in the inaugural ePrix in Beijing. The Indian followed that up with sixth place in Putrajaya, but as the team’s formed waned he failed to trouble the scorers again.

Bruno Senna scored his first Formula E points in Round 3 at Punta del Este, and ended the season on a high with a fine fourth place in the Battersea Park finale. But with only 58 points and eighth place in the standings, it was a disappointing return.

Nick Heidfeld was brought in to partner Senna for Season 2 and made an instant impression by recording the team’s maiden podium position in the first race of the season, again in Beijing. Senna starred at Battersea once more taking second place in the first part of the double header for his sole Formula E podium.

Swedish street racing specialist Felix Rosenqvist was added to the line-up alongside Heidfeld for Season 3 and right from the off it was clear that the team’s M3Electro was a significant step forward from the previous year’s car.

Heidfeld was on the podium at the season opener in Hong Kong, while Rosenqvist took the Visa Fastest Lap after clipping the wall and damaging his car early on. He recorded Mahindra’s first Julius Baer Pole Position in only his second race – Round 2 in Marrakesh – and ended the race in third for his maiden podium.

Rosenqvist recorded his second Visa Fastest Lap of the season next time out in Buenos Aires, but there was a disaster at Round 4 in Mexico City, where Heidfeld was tipped into a spin and Rosenqvist was left with nowhere to go, eliminating both cars at a stroke.

Heidfeld rebounded with back-to-back podiums in Monaco and Paris. From the moment they went one-two in the second free practice session, it was clear that Mahindra was going to be a factor in Berlin.

The combination of the track design and its unique surface suited its car probably better than any other team on the grid. Only a tiny error in the penultimate corner denied Rosenqvist pole for Race 1, but despite this he raced his way into the lead, passing Jose Maria Lopez at the start and Lucas di Grassi just before the pitstops.

Heidfeld had a slightly scrappy qualifying lap and started fourth. He too passed Lopez at the start, but despite closing in on di Grassi in the closing stages he had to settle for third.

Rosenqvist made amends in qualifying for Race 2 and scored his second pole of the season. Despite constant pressure from championship leader Sebastien Buemi, he was running comfortably out front.

Qualifying had been a disaster for Heidfeld, with a sensor issue meaning he lost power when he accelerated and gained it when he lifted off! Clearly the car was impossible to drive like this and he started dead last.

Heidfeld was on the fringes of the points when all the drivers pitted for the mid-race car swap and agonisingly, he came in just as Rosenqvist was leaving. There was brief confusion as he tried to get out of his team-mate’s way.

Despite Rosenqvist rejoining the race ahead of Buemi, the race stewards adjudged it to have been an unsafe release and he was handed a 10-second time penalty. However, such was the lead duo’s advantage over the rest of the field, this only dropped him to second.

After the race Rosenqvist was naturally heartbroken to have lost what he felt was a guaranteed win, but over the course of the event the team amassed 62 points, and moved the Swede into a clear third place in the championship standings, and he is now an outside contender for the title.

“There are so many positives from the weekend in Berlin, said Team Principal Dilbagh Gill. “It just goes to show that everything must come together for a win. Felix did an amazing job both days, his driving was perfect and to put our dominant M3Electro on pole after winning less than 24 hours before was magnificent to watch. I will always be in awe of Nick as well. His progress through the field from 20th to the points was a masterclass in wheel-to-wheel racing. Now, as a team we will look forward to preparing for the final races of the season!”

Jun 17, 2017Blagojce Krivevski
BMW i3 was best-selling plug-in model in May in SpainClean energy stored in electric vehicles to power buildings