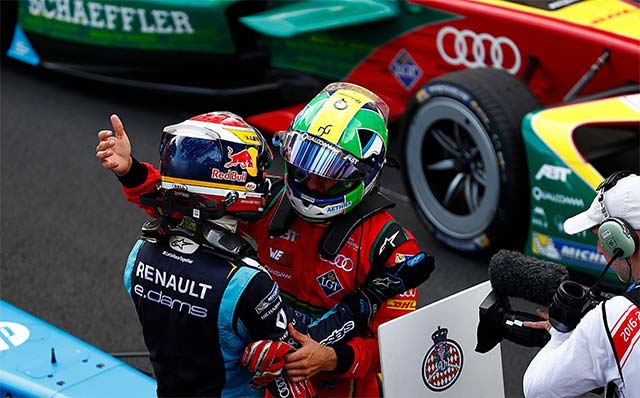 Sebastien Buemi’s win in the Monaco ePrix last time out was his 10th in the series, making him the first driver in Formula E history to reach double figures.

Since pre-season testing started ahead of the very first race in 2014, Sebastien Buemi has been a near permanent presence at the head of the field, so following that landmark win here is a look at all the Formula E records that he currently holds:

In addition to these, Buemi is also on a 20-race streak in which he’s scored points. This is an on-going record.

Monaco memories
As well as adding to a number of Buemi’s records, there were a few other notable occurrences in Monaco:

– Renault e.dams kept up its amazing record of having scored points in every single Formula E race
– After starting from a career-high fifth place, Venturi’s Maro Engel also recorded his best Formula E result by finishing in fifth too
– Eighth place for Esteban Gutierrez was his highest finish to date
– Buemi’s winning margin of 0.32s was the closest of the season and the second closest of all time
– Di Grassi’s second place increased his record number of podium finishes to 17

Paris pointers
The Paris street race made its debut on the calendar last season.

At just 86.4km it was the second shortest race of the season – this was because the race was red flagged slightly before its scheduled running time when Ma Qing Hua crashed.

The race had marked the debut for the Chinese driver, who went on to make seven starts in Formula E.

In the race Jean-Eric Vergne equaled his best career result with second place. The Frenchman has more podium finishes than any other driver without a win.

Mike Conway – who is returning to Formula E action this weekend – recorded the fastest time in the second practice session. It was the only him in his Formula E career so far that he’s topped a timing sheet.

May 19, 2017Blagojce Krivevski
6 Biggest things to happen to mobility before 2030Proterra Begins First Autonomous Bus Program In The US