6 Biggest things to happen to mobility before 2030 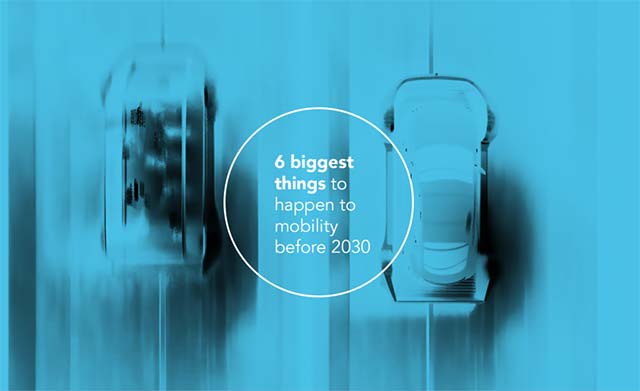 Predicting the future is a risky practice. The tumultuous turn of events and the fast-paced evolution of technology can make it quite tough for anyone to predict how an industry or human behavior will change over time. Yet thanks to an abundance of technological innovations taking place in the mobility industry today, we can finally peek into the glass ball and see how exactly we’ll be able to move around from place to place…

Urban mobility has become a key pain point every entrepreneur, business, and city these days. Not just because the world – think Paris Agreement, and generally just bad air – asks them to, but it has also become a significant competitive advantage to all of them. Whether it’s energy decentralization or shared mobility, every new solution is even more exciting and promising than the one before. And all of them are likely to become reality over the next 20 to 30 years. We listed the 6 most exciting ones in the video below. These’ll radically transform the way we move, and help transportation become faster, more efficient, more cost-effective, and for the most part…more sustainable.

The next and best solution to city congestion? An underground tunnel will transport cars on electric skates traveling at 200km/h (130miles/h). How on earth is this feasible? Ask Musk. In his recent TED Talk, Musk revealed his recipe for rescuing California from severe city congestion. “It affects people in every part of the world. It takes away so much of your life. It’s horrible. It’s particularly horrible in LA.”

From Airbus to Larry Page. The backing of electric plane development is the real deal. The first electric planes are expected to last in the air for about 1600km (1000miles) by 2030. A company called Zunum Aero, backed by Boeing and JetBlue, hopes to make this a reality. Touted the “Tesla of the Air” and the “Chevy Volt for Planes”, Zunum is now building a fleet of hybrid-electric planes, focusing on improving regional flights, especially within the US.

Battery prices are dropping by about 20% a year, and automakers no longer deny the importance of building an electric fleet. Companies like Volkswagen, Toyota, BMW, Audi, Volvo, Mercedes and many others are spending billions to speed up their development process and bring in new electric models before 2020. The future development of better battery designs is expected to help reduce the cost. Prices are expected to drop to $100/kWh before 2030, while energy density will double. Second-life batteries will be reused for clean energy storage and consumption at home. How do we know that this is serious? Well, even oil companies admit that fuel “demand will flatten out” after 2030.

The number of charging points worldwide have increased at least 10-fold since 2013. In 2016, the global market of charging services was worth $1.16 billion. Grand View Research estimates that this will increase to $46 billion by 2025. The passenger cars segment is anticipated to grow at the fastest rate. This can be attributed to the growing variety of new electric models that will be released in the next few years. The demand for new electric cars stimulates the development and growth of EV charging infrastructure, which is comprised by mainly two types of chargers: Alternating Current (AC) and Direct Current (DC) charging stations. Last but not least, the role of governments will be key as the need to create financial incentives will be key to accelerate the transition to electric mobility.

After Tesla; Chevy, Nissan, Waymo, and Uber also joined the self-driving bandwagon. Each testing hundreds of self-driving cars across US, Europe, and East-Asia. A dozen other car makers are following in the next 5 years. The Institute of Electrical and Electronics Engineers (IEEE) predicts that driverless cars will account for up to 75% of vehicles on the road by the year 2040. This means that in the upcoming decades, cities and roads will need to be altered and optimized to ensure flawless navigations of these cars.

It was always safe to assume the ever-expanding marketplace would consume everything we produced. But the economic downturn many years ago has brought the shift from a supply-driven economy to a demand-driven economy. The demand for a cleaner transport and alternative fuel cars is bigger than ever before. More than 30 million Americans are likely to buy an electric vehicle as their next car. Demand among millennials is especially high. If demand translates to sales, the electric car market will be in a very good place, regardless of any political setbacks.