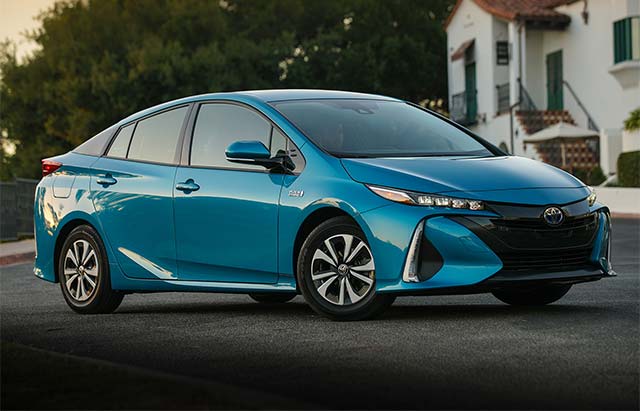 The Toyota Prius Prime was declared the 2017 World Green Car at a press conference hosted by the New York International Auto Show, Bridgestone Corporation, and Autoneum.

Jack Hollis, Group VP and General Manager of Toyota division commented, “It is a great honor to have both the Prius Prime and C‐HR nominated for World Car of the Year awards. For global automakers like Toyota, consideration for this award is a testament to our focus on developing products that both stir the emotions and meet the mobility needs of our customers in all corners of the world.”

To be eligible for the 2017 World Green Car award, a vehicle had to be all‐new, or substantially revised, in production and introduced for sale or lease to the public in quantities of at least 10 in at least one major market during the period beginning January 1, 2016 and ending May 31, 2017.   Tailpipe emissions, fuel consumption, and use of a major advanced power plant technology (beyond engine componentry), aimed specifically at increasing the vehicle’s environmental responsibility, were all taken into consideration.

Vehicles in all award categories are selected and voted on by an international jury panel comprised of 75 top‐level automotive journalists from 23 countries around the world.  Each juror was appointed by the World Car Steering Committee on the basis of his or her expertise, experience, credibility, and influence.  Each juror typically drives and evaluates new vehicles on a regular basis as part of their professional work.   Through their respective outlets they collectively reach an audience of many millions world‐wide.   The international accounting firm KPMG tabulates the jurors’ ballots.

The Road to World Car began in Paris on September 29, was followed by test‐drives in Los Angeles in November, continued in Geneva with the Top Three in the World announcement, and finally ended today with the declaration of the winners in six categories at the New York International Auto Show.

2017 marks the 11th anniversary of the partnership between World Car and the New York show, and the fourth consecutive year that the World Car Awards have retained their ranking as the number one automotive awards program in the world in terms of media reach.