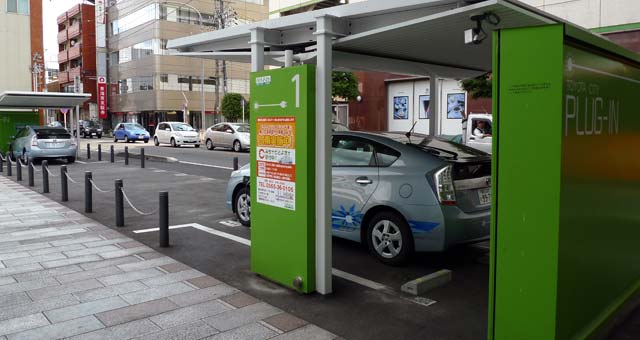 Toyota Motor Corporation will carry out verification tests in Aichi Prefecture, Japan from November 15, 2013 to March 15, 2014 to assess the practicality of the widespread deployment of chargers for plug-in hybrid vehicles (PHVs) and electric vehicles (EVs).

The tests, which are a continuation of a similar program implemented in 2012, will be conducted jointly with four local governments (Gamagori City, Toyohashi City, Nishio City, Kota Town) and 13 businesses and organizations.

In addition to commercial sites, where chargers were frequently used during last year’s program, the scope of this year’s tests will be expanded to include hotels and nearby tourist sites in response to EV and PHV user feedback.  Forty new chargers will be installed, supplementing the 32 chargers (some of which were non-subsidized) used in last year’s tests.

– With the cooperation of the four local governments involved in the project, chargers will be installed predominantly in hotels and tourist sites, aiming to boost local tourism, while also assessing changes in consumer awareness of PHVs and EVs.  During the test period, posters and other promotional materials will be displayed at community facilities and other participating locations to raise awareness of the program and to encourage use of the chargers.

–  To improve the system’s ease-of-use and expand its user base, authentication cards (Prius PHV member cards) for “G-Station” chargers developed by Toyota Media Service Corporation will be made compatible with “EVC1” chargers from Toyota Industries Corporation.

– Additional coin-operated chargers (100 yen per charge) will be installed at tourist sites to allow collection of fees and enable operators to recoup installation costs.  These chargers will also be used to investigate user trends and pricing structure suitability.

The tests qualify for the 2013 Subsidy Program to Support R&D for the Creation of New Aichi, a support fund established by Aichi Prefecture to counter deindustrialization trends.