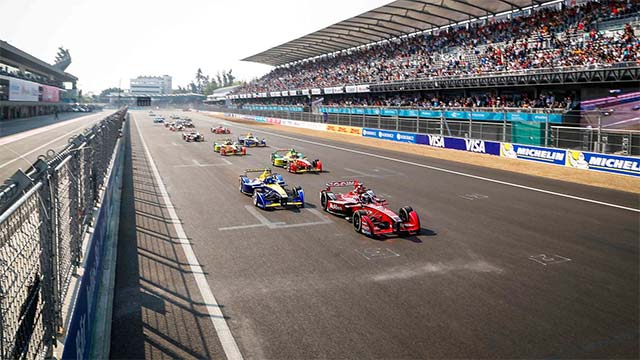 Formula E returns to Mexico City for the fourth round of the 2016/17 season, and the 25th race in the all-electric series’ history.

As we are now three races into the season, some interesting patterns are starting to emerge, while the previous race in Buenos Aires created some interesting additions to the Formula E record books.

– Sebastien Buemi is on the longest winning streak in Formula E history, having finished first in each of the opening three races this season

– His win – and Nico Prost’s fourth place – extended Renault e.dams phenomenal record of having scored points in every Formula E race so far

– Of the 10 Formula E teams, four more have also scored points in every Season 3 race: these are Abt Schaeffler Audi Sport, Mahindra, NextEV NIO and Faraday Future Dragon Racing

The curse of pole

– So far, not a single one of the drivers who set the Julius Baer Pole Position has converted it into a race win. The last pole sitter to win the race was Nico Prost in the first of the London rounds that wrapped up Season 2

– Buemi’s win was his ninth in Formula E. The Swiss has now won 37.5% of all Formula E races
– Buemi’s winning margin of 2.996s was the largest of the season to date
– Lucas di Grassi finally took his first Julius Baer Pole Position. He was the 11th different driver to claim pole: Buemi leads the way with six
– Di Grassi’s advantage of 0.194s over Jean-Eric Vergne in Super Pole was also the biggest of the season so far
– TECHEETAH recorded its first podium finish, thanks to Vergne’s second place
– Mitch Evans handed Panasonic Jaguar Racing its best qualifying result to date by lining up a career-best seventh. Adam Carroll also recorded his best qualifying performance in Formula E so far with 15th
– For the first time since the opening race of the Season 1 London double-header – and for only the third time ever – di Grassi finished a Formula E race in a lower position than he started it
– Third place for di Grassi extended his record number of podium finishes to 15. Buemi’s win was his 14th podium, while second place for Vergne was his fifth top-three finish, the most of any driver who’s not won a race
– 10th place equaled Jose Maria Lopez’s best result in Formula E so far

– The Mexico City ePrix will be the first for Esteban Gutierrez, who is replacing Ma Qing Hua at TECHEETAH. He will be the 48th different driver to race in Formula E, and the second from Mexico
– Following di Grassi’s post-race disqualification, the 2016 race featured the closest winning margin in Formula E history, with Jerome D’Ambrosio just 0.106s ahead of Buemi as they crossed the line side-by-side