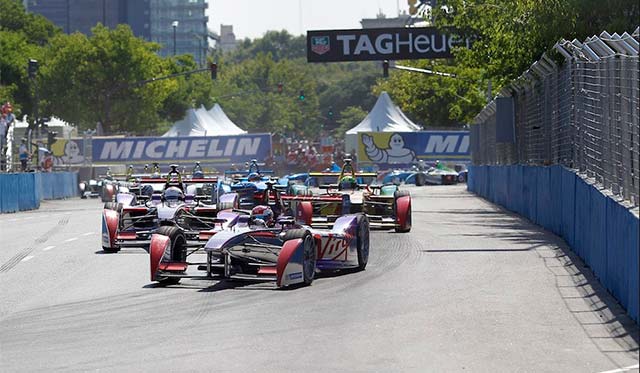 The FIA Formula E Championship returns to action this weekend with round three of the 2016/17 season, which takes place on the Puerto Madero circuit in the Argentinian capital, Buenos Aires.

It’s been three months since the last instalment of the all-electric city street racing series, which has given all the teams a chance to refine and hone their powertrains and set-ups.

The story so far
Reigning champion Sebastien Buemi has got off to an almost perfect title defence with back-to-back wins in the opening two races for Renault e.dams.

Such has been his dominance that even if he fails to score a single point this weekend, only two drivers could overtake him in the championship standings, Lucas di Grassi and Nico Prost. And even if either managed a perfect weekend ie grabbed all four bonus points for Julius Baer pole position and the Visa fastest lap, as well as taking the win, the most Buemi could be trailing by is seven points!

Di Grassi was second in Hong Kong after a charge from the back and inspired pit work by his Abt Schaeffler team, while Nick Heidfeld rounded out the podium for Mahindra.

Heidfeld’s team-mate Felix Rosenqvist was a maiden pole sitter for round two in Marrakesh and led for the first half of the race. But he was powerless to keep Buemi at bay and eventually slipped to third, behind the DS Virgin Racing entry of Sam Bird. Two fourth places for Prost means he’s third in the title hunt.

The Buenos Aires ePrix
The Puerto Madero track is the only venue to have featured in all three Formula E seasons. In season one, Antonio Felix da Costa took an emotional win for the Aguri team.

Buemi led the way, but clipped the wall at the fast chicane and broke the right-front suspension of the car. This handed the lead to di Grassi until the Brazilian’s race ended in spectacular style when the rear suspension of his car collapsed.

This promoted Heidfeld to the lead. Following the events of the season-opener, when Heidfeld was denied victory after he was taken out at the final corner by Nico Prost, the German had been a cause celebre for the fans, resulting in their #justiceforheidfeld FanBoost campaign. But just when it appeared that the Venturi ace was going to get his dues he was penalised for speeding in the pits, leaving da Costa to pick up the spoils.

A mistake in qualifying meant that Buemi started the season two race from the back of the grid, which was the cue for a barnstorming comeback drive through the field.

At the front, pole man Bird was pacing himself, fending off the challenge from Prost, da Costa and di Grassi with aplomb, which meant he had just enough energy in reserve to keep Buemi at bay when the Swiss finally worked his way into second.

Local hero
Jose Maria Lopez is one of Argentina’s most successful racing drivers. He is a three-time world champion in the World Touring Car Championship, claiming all three titles in a row before he joined DS Virgin Racing in Formula E.

Prior to that he was also a triple champion in TC2000, the biggest form of motorsport in Argentina.

To give Lopez or any of the other Formula E drivers a chance of winning FanBoost, click here.