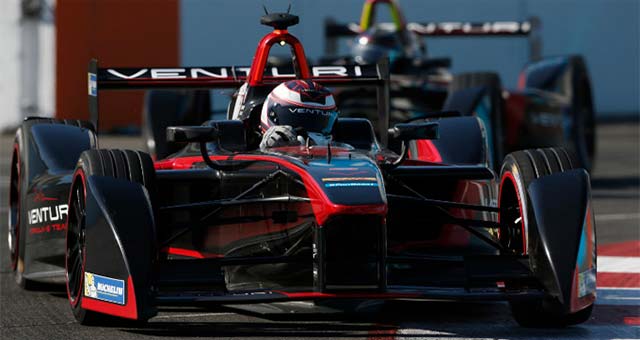 Sitting in between the foothills of the Western Alps and the Monaco harbour front you’ll find Fontvieille, home of the Venturi Automobiles headquarters. Based in the Principality, Venturi is a renowned leader in high performance electric vehicles and a pioneer in the advancement of electric powertrains.

The Venturi outfit is well-known for embarking on a number of special projects including an attempt to beat their own FIA world land speed record for an electric vehicle on the Salt Flats of Bonneville, USA. Now it’s the turn of Formula E, a different challenge altogether…

Mission Statement
The inaugural season of Formula E may offer little in the way of progressive innovations with restricted regulations but as an open championship the aim is to introduce manufacturers to develop their own components. This process starts as early as next season with the arrival of eight manufacturers and is exactly what attracted Venturi to enter the first fully-electric series.

“I think if you look at our DNA we are an electric vehicle car company therefore we have a deep understanding of EV powertrains and batteries technologies,” said Jim Wright, Head of Commercial at Venturi.

“Because we have competed in competitions and the FIA land speed record programme, we are able to make sure that powertrain and battery development is at the forefront of what we do. We come from an electric vehicle background and electric vehicles are our speciality.”

History
Founded in 1984 with the presentation of their first car, a two-seater prototype with a 2-litre VW Golf GTI engine, Venturi originally built mid-engined coupes and roadsters with the objective to compete against other European car giants such Porsche and Ferrari.

The more familiar Venturi we see today is the creation of Gildo Pallanca Pastor (company’s president) who purchased the company in 2001 and re-located to Monaco, making the bold decision to shift the emphasis to renewable energies and in particular electric power.

However, just producing and selling electric vehicles is not enough for Venturi Automobiles. The team has pursued various challenges in order to push the boundaries of what was previously thought to be achievable by an electric vehicle. Projects include the unassisted journey in an electric vehicle from Shanghai to Paris – a distance of 14,900km across eight countries.

Most notably Venturi is the current holder of the world land speed record for an electric vehicle with 495kph (307mph).

The Venturi name isn’t one necessarily synonymous to motor racing but with Formula E the team has the chance to cement itself as a key player in electric powertrain development.

Following the announcement of the team in December 2013, DiCaprio said: “The future of our planet depends on our ability to embrace fuel-efficient, clean-energy vehicles. Venturi has shown tremendous foresight in their decision to create an environmentally friendly racing team, and I am happy to be a part of this effort.”

Drivers
Unfortunately the final lap of the opening race in Beijing sums up the season for both Venturi drivers – full of potential but no end result.

The line-up at Venturi has remained unchanged throughout pre-season testing to the last outing in Long Beach. Nick Heidfeld and Stephane Sarrazin bring with them a wealth of experience from Formula 1, World Rally Championship (WRC) and endurance racing. However, the team currently sit at the bottom of the team standings with a best place finish of eighth in Buenos Aires.

Reflecting on the season so far, Heidfeld said: “Well it has not gone very well at all! We are currently last in the team standings but looking at the speed we have shown over the season it is obviously not where we should be. On the other hand this is where we finished the races so it’s been very tough but we are still working very hard to achieve good results soon.”

He added: “I’ve said since the beginning we need to make use of the pace where we have it because if you are quick for one race it doesn’t mean it will be like this forever. After Beijing I was leading again in Buenos Aires and we have good pace but at the past two races we have fallen back. Following the opening couple of races I thought we could have a shot at the championship but now it’s unfortunately unrealistic to expect that.”

Future
If year one is a learning process, the second season of Formula E is a chance to implement changes to the powertrain and supply potential customer teams. Team Principal Nicolas Mauduit hopes previous experience of developing electric vehicle technology at Venturi Automobiles will prove beneficial.

“We have been selected by the FIA to supply a new motor for season two,” said Mauduit. “We will propose a new motor for this championship and a new powertrain in general so all the background from Venturi Automobiles will be available from season two. That will be very interesting to see where we are and to see all the manufacturers compete from next year. This year all our knowledge helped to manage mainly on the battery side and to work on the strategy between energy versus power.”

Despite the regulations allowing only a few small changes to the e-motor, the inverter, the gearbox and the cooling system, Mauduit thinks improving efficiency is key to success. He added: “There are still quite strict regulations we need to comply with but we think we can bring some really advanced components to the championship. Our main focus is the efficiency. All that we have learnt so far from the land speed record programme… we would like to bring that to the Formula E team!”

Apr 27, 2015Blagojce Krivevski
The Truth About Autonomous Drive Cars, By Carlos GhosnEVs Could Be The Route To Happiness For The 70% Of UK Drivers Seeking Less Stressful Journeys