Over 11K plug-in vehicles sold in The Netherlands in December 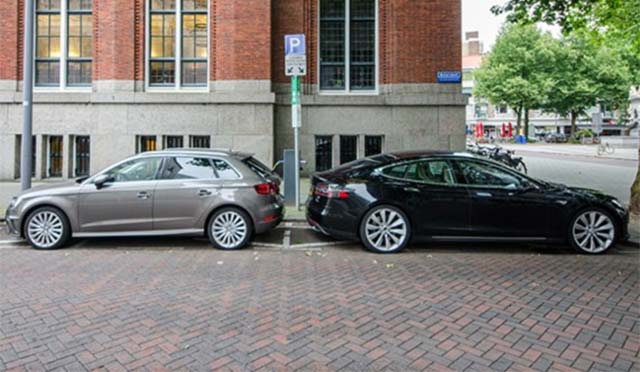 Plug-in vehicle market in The Netherlands surged in December fivefold to 11,114 units, representing some 30% of all cars sold that month. This surprising result is heavily influenced by the fiscal changes that happened on January 1st.

The Mitsubishi Outlander PHEV was second, with 1,065 units, allowing it to be the third best-selling model in the general ranking, behind the Renault Clio (1.150 units) and the VW Passat GTE. In third we had the BMW 330e, with 1,033 sales and responsible for 86% of all 3-Series registered, earning the fourth place in the global ranking.

In fact, the December general ranking had five plug-ins in the top six positions, a first anywhere, besides the aforementioned VW Passat GTE (#1), Outlander PHEV (#3) and BMW 330e (#4), the Audi Q7 e-Tron was sixth with 947 units.

In the 2016 ranking, the December surge allowed the numbers to reach some 23,000 units and the plug-in vehicle market share to climb to 6%, far from the almost 10% of 2015, but still enough to be the highest plug-in vehicle share in the European Union.

Interestingly, all-electric cars grew 31% this year to 4.148 units regarding 2015, while plug-in hybrids dropped to less than half, with 18,864 units. It will be interesting to see how the market behaves in 2017, now that plug-in hybrids lost their fiscal incentives as company cars.

The last minute leader was the Volkswagen Passat GTE (3,987 units), followed by the #2 BMW 330e (2,418) and #3 Volvo XC90 PHEV (2,230), with the VW model becoming the second best-selling model in the D-Segment, only behind the regularly fueled Passat, while the XC90 was the best-selling Luxury SUV in Dutch lands.

Confirming a trend for plug-in success in the highest end of the market, the Tesla Model S (1,723 units) was the second best-selling model in the E-Segment, only behind the Mercedes E-Class, that had the precious help of its PHEV version, the E350e, contributing with 923 of the 2,266 units registered by the Mercedes model.

Finally, looking at other alternative fuels, fuel cell cars ended 2016 with the same number of registrations it had in the previous year, 14, with the Toyota Mirai (7 units) making up for the drop in sales of the Hyundai ix35 Fuel Cell (7 units now vs 12 in 2015), while CNG models were down 28% YoY to 544 units.