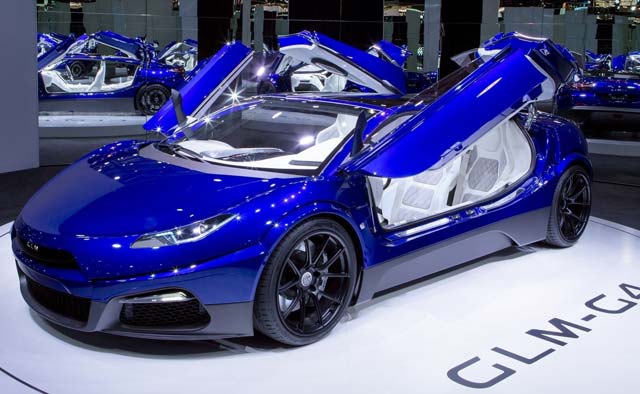 Japanese company GLM Co., Ltd. has launched its brand and showcased its electric supercars, the GLM-G4 and GLM ZZ, at an event in Hong Kong last week.

Based in Kyoto, GLM was established in 2010 and is the first Japanese electric vehicle manufacturer certified by the Ministry of Transportation. In the course of its development, GLM has formed a number of direct partnerships with over 100 leading vehicle technology companies to conduct research into and development of new forms of vehicles and transportation beyond conventional automobiles.

GLM provides a packaged solution which includes chassis, power systems and vehicle control units (VCU) in order to enhance the performance of electric vehicles, namely that in power consumption and acceleration by thrust. GLM also provides solutions for third parties, including EV technology developers and vehicle manufacturers. GLM has a wealth of expertise to create the chassis and power systems that meets its business partners’ needs. It also offers a package of schemes to cater for a range of different driving styles. With the infrastructure for joint development, GLM can support new entrants into the automotive industry.

GLM launched its first car, GLM ZZ, as Japan’s first electric sports car for the mass market in August 2014. Made almost entirely from parts produced in Kyoto, the lean and mean machine has an impressive thrust to accelerate from zero to 100 km/h (0-62 mph) in 3.9 seconds.

In October 2016, GLM presented the GLM G4 at the Paris Motor Show 2016. The company adopted its key packaged solution, including chassis, power systems and VCU, in manufacturing GLM G4 so as to create one of the best models of electric vehicle for the upper market. GLM G4 features a multistage transmission that improves the performance, which is not affected by the powertrain output. The model is installed with the insulated-gate bipolar transistor (IGBT) systems that help to reduce the switching loss and improve the electrical efficiency. GLM G4 also has a light and solid chassis which is made of composite materials. The vehicle is able to accelerate from zero to 100 km/h (0-62 mph) in less than 3.7 seconds and to cruise at 250 km/h (155 mph) with a driving range of above 248 miles (400 km).

China’s automotive industry is enjoying a boom as it is supported by the government’s favorable policies such as fiscal subsidies, tax exemption and the measures to encourage construction of more charging facilities. GLM plans to set up a workshop and R&D center in the country to tap the demand in Greater China.