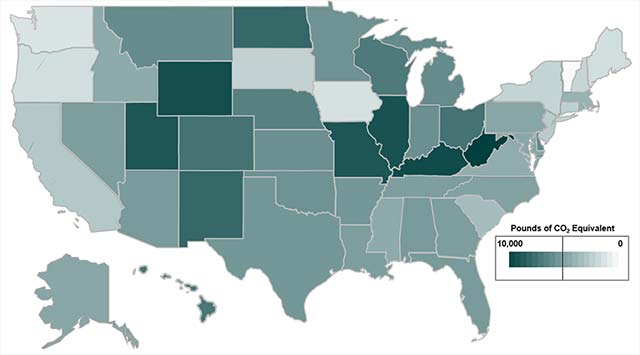 An all-electric vehicle does not produce emissions from the tailpipe, but there are upstream emissions (also called well-to-wheel emissions) of greenhouse gases from electricity production.

Using electricity production data by source and state, the Alternative Fuels Data Center has estimated the annual CO2-equivalent emissions of a typical EV.

EVs charging in Vermont are estimated to produce the fewest emissions – oil and gas make up only 1.2% of the electricity sources in the state while cleaner sources such as nuclear, hydro, biomass, wind, and solar make up the rest. West Virginia’s electricity production is 95.7% from coal, making it the state with the most well-to-wheel CO2-equivalent emissions.

Well-to-Wheel Emissions from a Typical EV by State, 2015