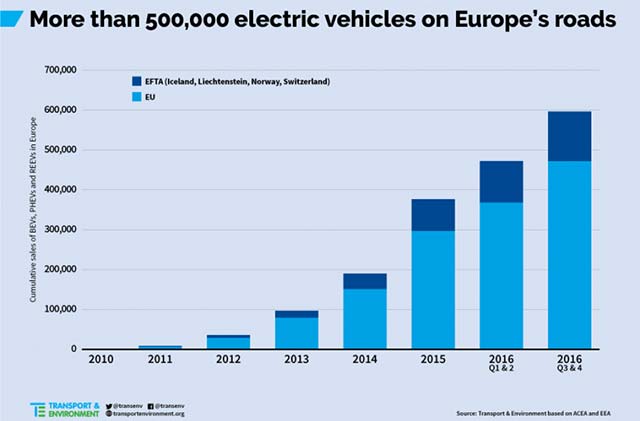 Europe will see more than half a million electric vehicles on its roads by the end of 2016, a report by Transport & Environment (T&E) reveals.

The European Union doubled the sales of plug-in hybrid and electric vehicles in 2015 reaching 145,000 units sold, the biggest sales increase for any year to date. Including Norway (and other non-EU members) Europe is the second largest market for purely electric cars in the world. 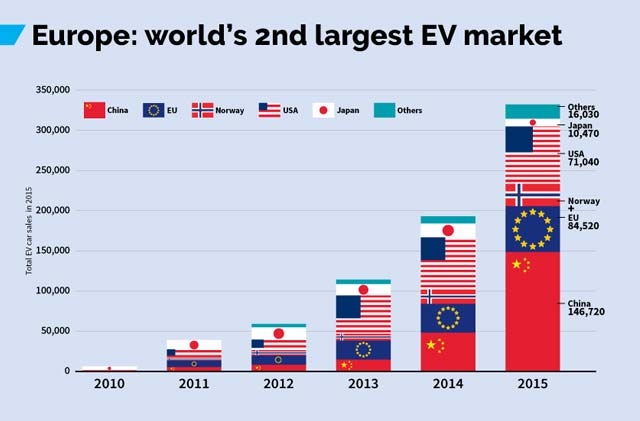 Mitsubishi sold the largest amount of EVs in 2015 (28,175), accounting for 23% of all its sales in Europe. Mitsubishi sold 27,977 Outlanders, a plug-in hybrid car, making it the most popular EV choice in Europe in 2015.  However, there are concerns the short electric range undermines its environmental benefits (1). The second best-selling EV is the Renault Zoe, a battery electric model with 16,612 units. The Nissan Leaf (11,977 units sold) lost its 3rd position to the new Golf GTE with almost 15,000 new registrations. 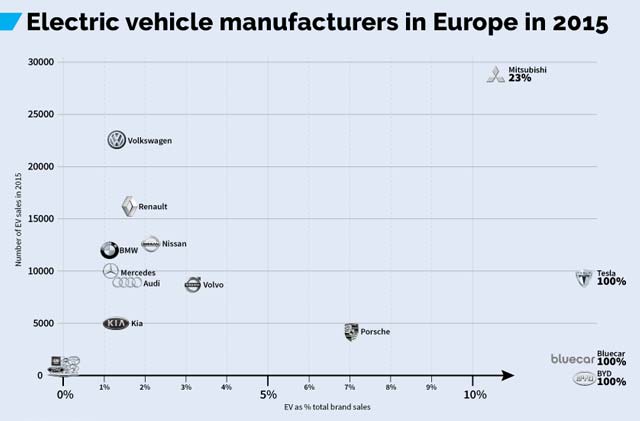 The Netherlands tops the list of EV sales for the third year in a row, with a 8.8% share of plug-in vehicles. Norway is second in terms of absolute sales but has a much higher market share, 18.7%. The Dutch market is mainly plug-in hybrid (PHEVs) models whilst those in Norway are mainly battery electric vehicles (BEVs). The UK sells the third highest level of EVs, although it is notable that PHEVs predominate in sales even though the purchase incentive offered is markedly less.

France has the second biggest share of BEVs, reflecting the relatively generous bonus under its CO₂-based bonus-malus car purchasing scheme. Germany has a very ambitious electromobility scheme that aims for one million EVs on its streets by 2020. However, it has only recently introduced any incentives that should increase demand in 2016, which helps explain the fact that only 0.7% of total vehicle sales in Germany were EVs. 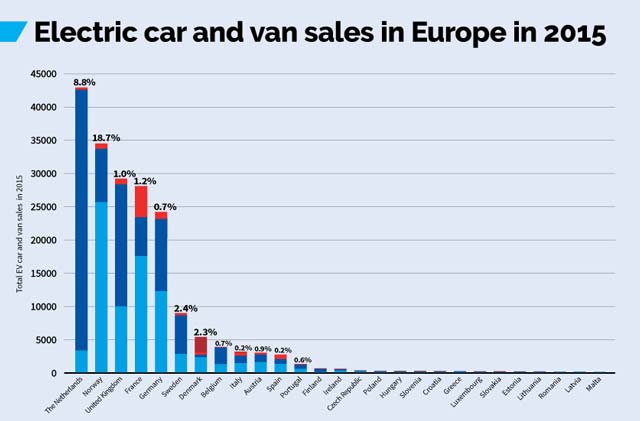 Sales of electric vans are a fraction of those of cars, with very limited availability of models in the market. But cars and vans aren’t the most popular electric vehicles in Europe: T&E estimated that last year there were between 5 and 8 million e-bikes and e-scooters on Europe’s roads.

Transport has become Europe’s biggest climate problem. Cars are responsible for 15% of Europe’s total CO2 emissions and are the single largest source of emissions in the transport sector. The EU’s obligatory rules on carbon emissions require car manufacturers to limit their average car to a maximum of 95 grams of CO2 by 2021. The European Commission agreed to propose stricter CO2 limits for cars for 2025 early next year.