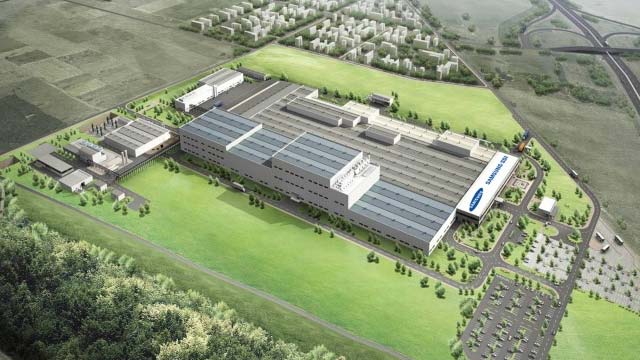 Samsung SDI decided Hungary as the foothold for producing electric car batteries in Europe and launched construction of its plant. The new facility in Hungary will enable Samsung SDI to establish a triangular production structure along with existing plants in Ulsan, Korea and Xian, China.

Aiming to start commercial production in 2nd half of 2018, Samsung SDI will build production lines with annual capacity of batteries for 50,000 pure electric vehicles, investing around 400 billion won (about 321.4 million euros).

The new battery plant of Samsung SDI will be built in Goed located in a distance of 25 kilometers to north of Budapest in a site area of about 330,000 square meters by utilizing existing facilities previously used for display production.

As it can use large portion of existing plant infrastructure, Samsung SDI is expected to generate profit sooner than usual by reducing construction period and costs.

The company initially built the plant in Hungary in 2001 to manufacture cathode ray tubes (CRTs) and remodeled it for PDP production several years thereafter.

In addition, the new plant in Hungary will enable the company to significantly reduce logistic costs while immediately responding to demand from customers since production bases of European automotive manufacturers are concentrated in Central and Eastern Europe.

Moreover, the company will be able to sharpen its competitive edge in automotive battery industry by establishing integrated production system ranging from battery cells to packs, generating synergy with SDIBS (SDI Battery Systems, Austria), the production base of battery packs it acquired last year.

“By launching construction for the plant in Hungary, we now can set up the global triangular production structure for electric vehicle batteries. We can especially provide higher quality services to European customers in Europe by generating synergy with SDIBS.” said Executive Vice President Jeong SehWoong & Head of Automotive & ESS Business division.