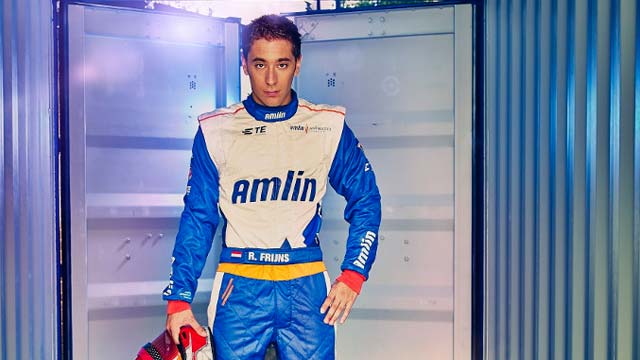 Robin Frijns has been confirmed as team-mate to Simona de Silvestro at Andretti for the 2015-2016 FIA Formula E Championship.

Frijns has already been behind the wheel of the Formula E car on the final day of pre-season testing at Donington Park and will make his debut at the Beijing ePrix on October 24.

“It is an honour to be part of the Andretti family and to drive for them in Formula E,” said Frijns. “It’s a new championship and a completely new challenge for me. The way of driving and saving energy is going to be tough but fun and I am really looking forward to the first race in Beijing in a few weeks.”

The GP2 race-winner is a single-seater champion across a number of categories including Formula BMW Europe, Formula Renault 2.0 Eurocup and World Series by Renault 3.5.

In a related news, Formula E will continue to be televised live and free-to-air on ITV in the UK for the second season of the FIA Formula E Championship.

All 11 rounds will be broadcast live on ITV4 and ITV4 HD with the season-ending London ePrix aired live on ITV. The network’s flagship channel will also show an extensive highlights programme after each ePrix.

Meanwhile for the German viewers, all 11 rounds of the 2015-2016 FIA Formula E Championship will be televised live and free-to-air on Eurosport.

Eurosport has secured the exclusive TV and digital rights to the FIA Formula E Championship for the next two seasons in Germany, Poland, Sweden, Norway, Denmark and Finland, as well as Iceland on a non-exclusive basis.

Further TV deals will be announced in the coming weeks.