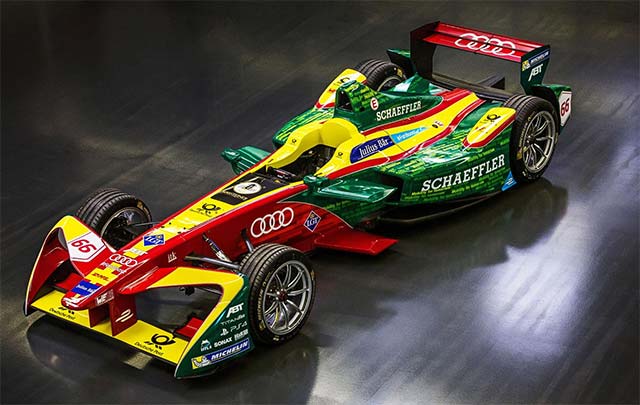 The Abt Schaeffler Audi Sport team will continue with the philosophy of running a single motor and a three-speed gearbox in season three of the FIA Formula E Championship.

Its technical partner Schaeffler developed the powertrain for season two and has decided to continue down the same path for season three.

Dr Simon Opel, Director Special Projects Motorsports at Schaeffler, said: “I think we developed a very successful powertrain for the second season and we did a lot of simulation and had a look at the options and we decided that we would stay with the same concept for season three, which means we have one motor and three gears. It was something of a development race because parallel to testing and the racing now we are working on season four development.”

For season three, the car features significant branding from Audi, and team owner Hans-Jurgen Abt said he was excited by the opportunities this creates for the team.

“We had a great season last season, but this year we see that Jaguar is joining alongside Renault and DS, so we know the competition is growing,” he said. “And we want to grow too. We have improved everything on the car – engine, gearbox, everything you need to be competitive.”

While Audi has confirmed it will offer support to the Abt Schaeffler team in season three, it will not have a deep technical input until season four. Former Audi factory driver, and multiple Le Mans winner, Allan McNish is now an ambassador for the brand.

“It’s the next step for Audi,” he said. “We introduced the direct injection diesel back in 2006 and more latterly the e-tron hybrid. The next step in road car tech is electrification. By 2025 the vision is for one in four Audis sold to be electric so therefore there is an obvious synergy in what happens on the circuit – as we have proven over many years – to what happens on the road and Formula E is very important for the future.”