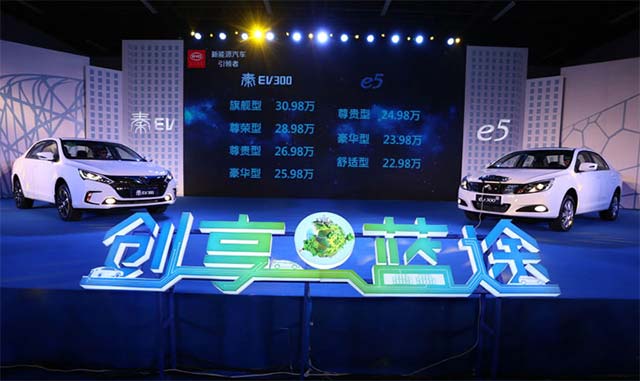 China continues to storm ahead for plug-in vehicle (NEV, New Electric Vehicle) adoption. Every month is a new high in terms of share and volumes are 135 % above 2015 for the first 7 months.

January started with doubling the volumes of last year and this trend continued during the whole first half of 2016, with the exception of March. It is very likely that 2016 sales in China will hit 430k plug-in vehicles making the vehicle park reaching 700k plug-ins.

July was the first month when NEVs passed the 2 % share mark in total passenger vehicle sales. With the current trend, it can reach around 3 % for the last months of 2016. The total passenger car market in China is still bullish and expected to finish at 23,5 million vehicles for 2016 (+11 %).

Chinese brands totally dominate the market. The best-selling foreign brand in China is still Tesla (2 % share), with the Model S. The first Model X have reached the market in China during June. Most Chinese OEM and start-ups like LeEco in particular, have announced to combine NEVs with new business models for vehicle ownership and mobility services. Their capacity plans are counted in the 100-thousands, indicating the confidence of the Chinese industry in the NEV sector.

EVs and PHEVs in China
With the success of the BYD Qin and Tang, the mix shifted towards plug-in hybrids in 2015.

For 2016, subsidies are depending on all-electric range, with 100 km as a minimum requirement. Many of the ever so popular mini-EVs had to be upgraded to obtain subsidies in China. This caused low sales of mini-EVs during Q1 and their rebound in Q2 and July.

Mini-EVs (A-segment) still stand for a large portion of BEV sales ( 25-30 %), but their significance is decreasing as consumers and authorities get more demanding. In 2015, the A-segment stood for 60 % of all BEV sales. 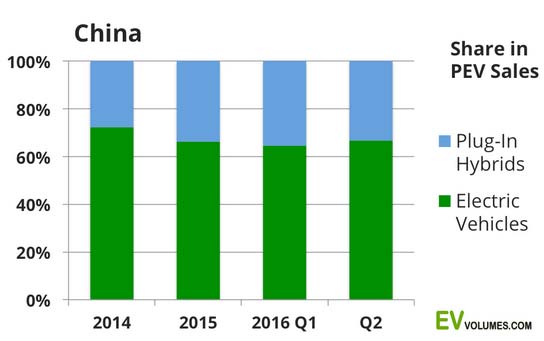 July top-10 Plug-in sales China
July was good for some surprises, with BYD Qin selling more than BYD Tang, which has been the best-selling plug-in in China in every month since September 2015.

Another is the Zhidou mini-EV, on the market since August 2015, halted for updates in Q1 and now back on a respectable 2nd place. The Zhidou D2, also known as the ‘ZD D2’, is made by the Zhi Dou Electric Vehicle Corporation, a branch of the Xindayang Group. A variant of the D2 for is sold by Zotye Automotive, dubbed ‘E20’.

Missing in the top 10 is the Geely-Kandi EK-2 / Panda, which had only 200 sales in July after a 6 month break for updates without sales at all. It’s not in the 2016-H1 listing either, for that reason. Shared by Geely and Kandi, it was Chinas best-selling EV in 2015. 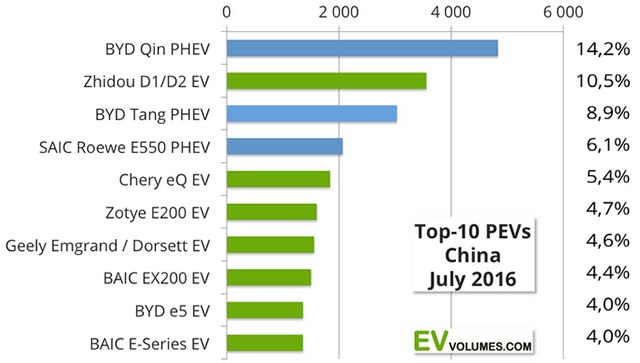 Plug-in sales ranking for Q2 and H1 2016
Sales of last year’s winner, BYD Qin PHEV seems to be cannibalized by the increasing sales of the BYD Tang, which is the most popular vehicle, already reaching almost 20k units for the first half in 2016. Together, BYD vehicles (Tang, Qin, Denza, e5, e6) now account for 33 % of NEV sales in China thus continuing the position as the largest plug-in vehicle maker today. Total of 44137 units of BYD NEVs were during delivered in H1 2016.

With SUV being high en vogue in China, the Tang SUV is likely to be joined by 2 smaller SUVs, the Song and the Yuan, later in 2016. They come as plug-in hybrids and pure EVs, which is novel in this segment. 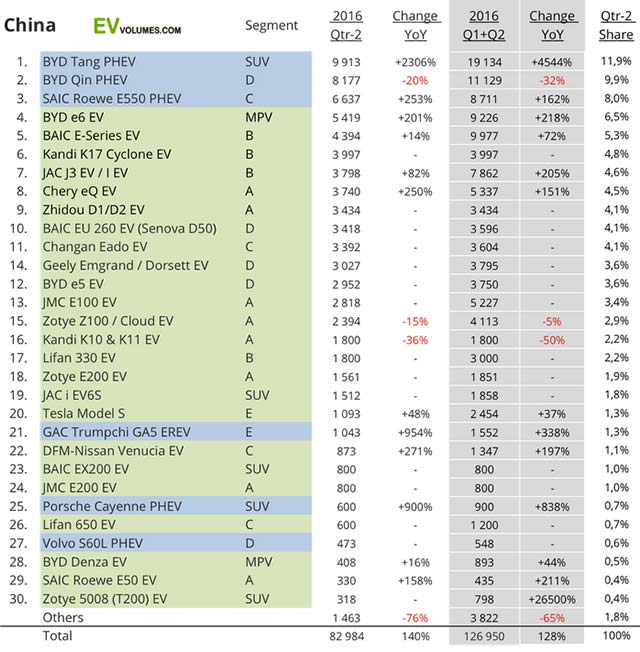 Plug-in Share Development
NEV shares in China are prone to increase further, during 2016. The major influence is that availability of license plates is limited for conventional vehicles in the major cities. NEVs are exempted from these restrictions and get plates regardless.

New and attractive models for the 2017 model-year, BYD EV300 and Geely EC7, to name a few, will create further demand for plug-ins.

There will also be changes in the incentive scheme in China as central and some local subsidies are reduced by 20 % for 2017. This will likely lead to sales to be pulled ahead into Q4 of 2016. 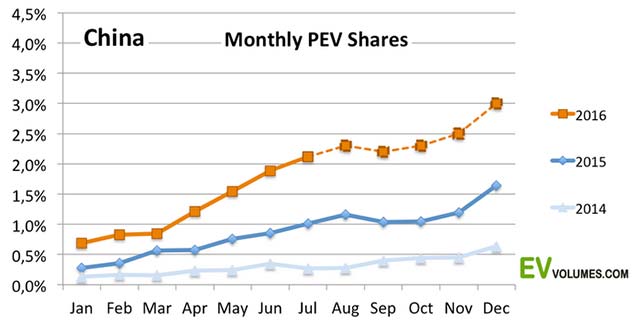 Outlook for 2016
With the current plug-in share development we are expecting 430 000 plug-in passenger cars to be sold in 2016. In addition there will be sales of around 80 000 large busses for public transport, which we are not tracking in detail. This makes China by far the largest region for plug-in sales, with 50 % of the world market.

The number of plug-ins on the road will reach 700k units at the end of 2016, making China also the market with the largest PEV population, even though the US and Europe have had years of lead prior to Chinese ramp-up of NEVs. China has a target of 5 million New Energy Vehicles (of all categories) on the road by the end of 2020. With the current pace of adoption, this target is likely to be met. The only reservation is that subsidies and tax exemptions are phased out too fast. 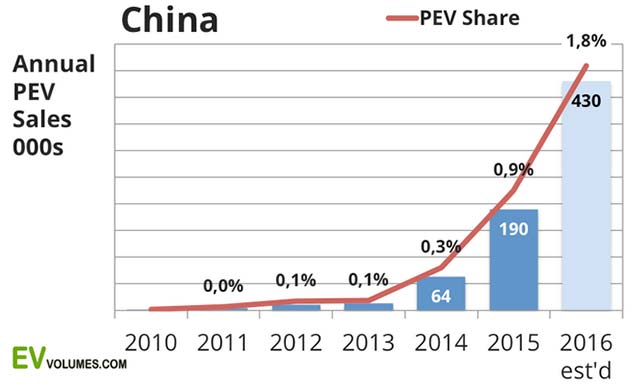