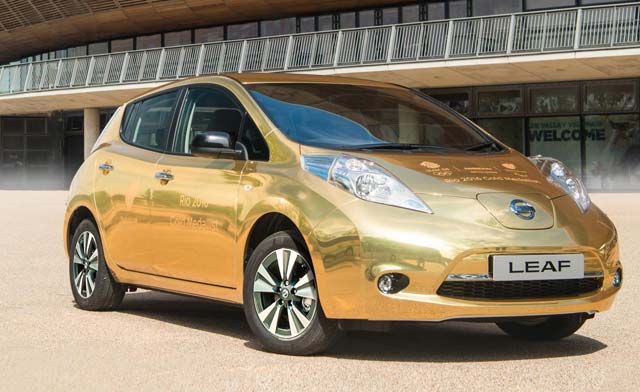 Gymnastics sensation Max Whitlock has become one of the first Team GB athletes to be presented with a stunning all-gold 100% electric Nissan LEAF following his medal triumph at the Rio 2016 Olympic Games yesterday.

The Nissan ambassador made headlines around the world when he took two gold medals – securing gold on the floor and pommel horse – on what has been dubbed ‘Sensational Sunday’.

In recognition of his astonishing achievement, Nissan will now present him with the keys to a LEAF completely wrapped in brilliant bright gold – on his return to the UK.

Nissan Team GB and Paralympics GB athletes returning from Rio with a gold medal will be presented with a gold Nissan LEAF, making it one of the most limited edition Nissan models ever.

Nissan is the official automotive partner of Team GB and Paralympics GB and has been delighted by the success of its other competing ambassador athletes so far, including first gold LEAF winner – rower George Nash, for his win in the men’s coxless-four.

Nissan ambassador Sir Chris Hoy, launched the Gold LEAF campaign announcing that all Nissan sponsored athletes who win a gold medal at the Rio Games would be rewarded with a special gold wrapped all-electric Nissan LEAF upon their return from Rio.

Only one Nissan LEAF will be gifted per Nissan gold medal winner, regardless of the number of gold medals won.