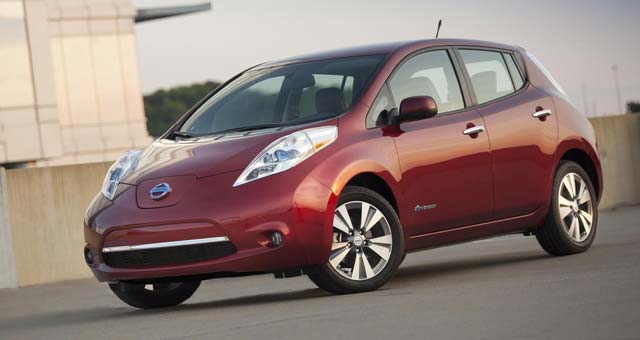 The 2014 Nissan LEAF is available in three trim levels: LEAF S, SV and SL, along with option packages offering advanced systems such as Around View Monitor and 7-speaker Bose audio.

Enhancements for 2014 include the addition of the RearView Monitor as standard equipment on all models (previously part of the Charge Package) and one new exterior color – Gun Metallic (seven total available colors).

The established leader in the “no gas, no tailpipe” zero-emission era, the 2014 model year LEAF’s driving range is rated at 84 miles and MPGe ratings are 126 City, 101 Highway and 114 Combined.

For 2014, LEAF is powered by an advanced lithium-ion battery composed of 48 compact modules and a high-response 80kW AC synchronous motor that generates 107 horsepower and 187 lb-ft of torque, providing a highly responsive, fun-to-drive experience that is in keeping with what consumers have come to expect from traditional, gasoline-powered vehicles. Unlike internal-combustion engine-equipped vehicles, LEAF’s powertrain has no tailpipe and thus no emission of CO2 or other greenhouse gases while being driven.

2014 Nissan LEAF can be charged up to 80 percent of its full capacity in 30 minutes when equipped with a quick charge port and using a DC fast charger. Charging at home through a 220V outlet is estimated to take approximately five hours with the 6.6 kW onboard charger (approximately eight hours with the S grade’s standard 3.6 kW charger). The advanced lithium-ion battery pack carries an industry-competitive warranty of 8 years or 100,000 miles.

The 100 percent electric LEAF continues to offer outstanding value, with prices comparable to similar gasoline-powered vehicles after applicable tax credits. Sales of the zero emission LEAF in the U.S. and around the world set all-time records in 2013.