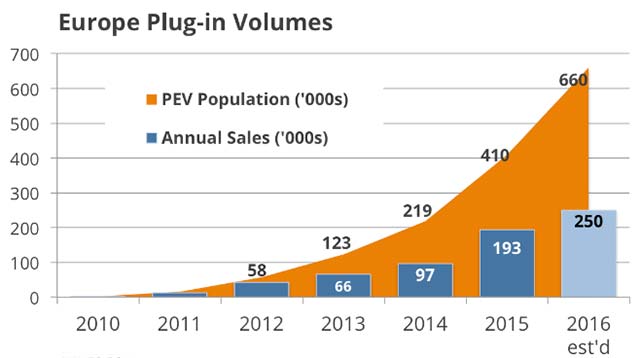 Plug-in vehicle sales in Europe so far are 91 300 units until June, 21 % higher than for the same period in 2015. These include all global battery electric (BEV) and plug-in hybrid (PHEV) passenger cars sales and light commercial vehicle in Europe.

Plug-in share of the European light vehicle market reached 1.1 and 1.2 % in during the first 4 months, but fell back below last year’s shares in May and June. Growth for the 2nd quarter was just 13 %. The sluggish development relates to much lower sales in the Netherlands, Switzerland and Denmark compared to last year.

Norway, Sweden, France and U.K. continued the strong growth pace, volumes in Spain, Portugal, Austria, Finland and Belgium doubled or more, albeit from low levels. In Germany, growth slowed down in anticipation of the recently announced grants, the first applications could not be filed before July. Italy sales still stagnate.

The common trend is a shift in mix towards plug-in hybrids in nearly all markets, even in Norway, which traditionally is the world’s EV-dorado. The exception is Netherlands, where revised taxation lead to a collapse of PHEV sales, without favoring pure EVs either.

The growth is in Plug-in Hybrids
In all top-5 markets (in terms of light vehicle share) EVs lost volume and PHEVs gained, compared to 2015. In all markets, except Austria, PHEVs grew faster than pure EVs. New, attractive plug-in hybrid offers from popular brands and the still unsatisfactory range / charging convenience for most EVs are the main reason behind the development. 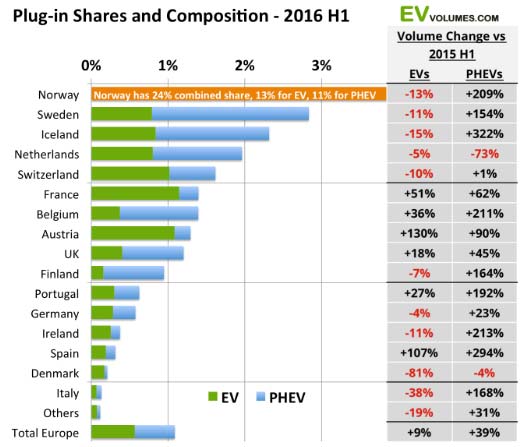 Regarding total-plug-in share, Norway is (as usual) off the chart. No other country is comes close to the 24 % share which Norway has performed during this year. Sweden now comes 2nd, the place held by the Netherlands last year. Belgium, Austria and the U.K. made it over the 1 % mark this year. Among the big-5 vehicle markets in Europe France clearly leads, whereas Germany and Italy are clearly below the European average share which is 1.1 % for the first half of 2016.

Zoe beats Outlander for #1
The June snapshot shows the growing popularity of the Renault Zoe, a pure EV which has been on the market since the beginning of 2013, without many changes. June is usually the best month for, both, the French vehicle market and for Zoe and it clearly shows in the ranking as the majority of Zoe sales are in France.

Tesla Model S sales nearly on par with Nissan Leaf is an anomaly which less relates to weak Leaf sales than the quarterly reporting cycles of Tesla earnings. 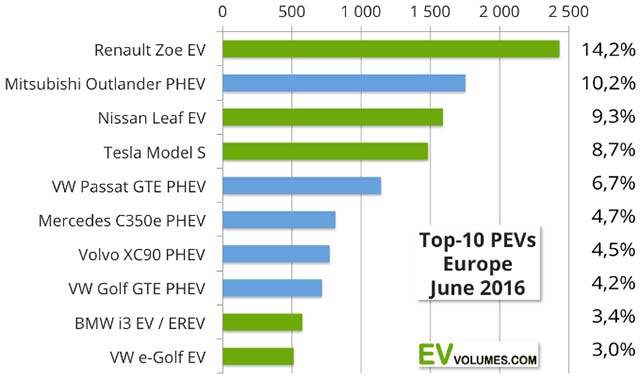 BMW i3 had another weak month in anticipation of the 2017 model-year with 50 % more battery capacity.

Results for Q2 and the first half of 2016
The long term leader of Europe plug-in sales, Mitsubishi Outlander PHEV, has lost it to the Zoe this year, by just 740 units, but still. 55 % of Zoe sales are still in France, but fast growth in markets like U.K., Germany, Austria and Spain helped to boost export volume. One out of 8 plug-ins and one out of 4 EVs was a Zoe in Q2. 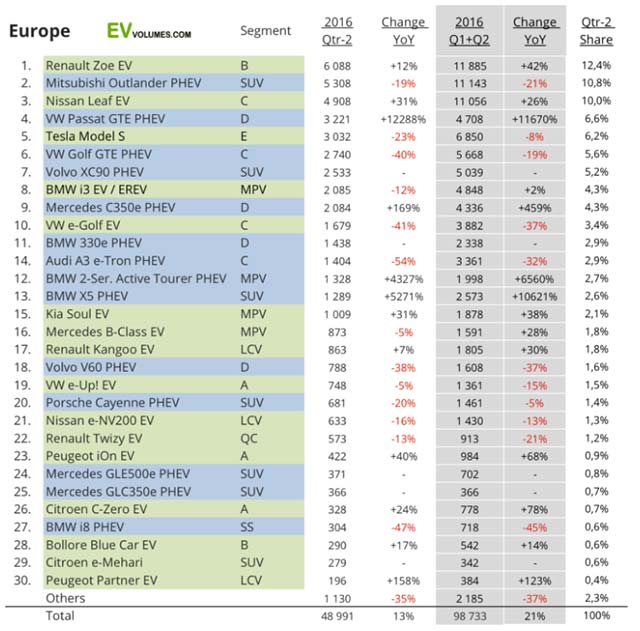 The Nissan Leaf grew by 31 % despite its age and an imminent successor in 2017, thanks to strong performance in France and Norway. The Tesla Model S lost 2 places in the ranking, the losses were mainly in Norway and Denmark.

Europe Plug-in Shares
The recent development is disappointing, with shares below 2015 in May and June. It still converted to a 10 % rsp. 1 % volume gain because the total vehicle market posted strong increases. Not so for plug-ins, where volumes are dragged down by adverse conditions in several markets: NL car buyers still refuse to adopt plug-ins with the revised incentive schemes, Germany still waits for grants to be applied for and Denmark is a tragedy given the past investments in green power generation and an extensive fast charging infrastructure. 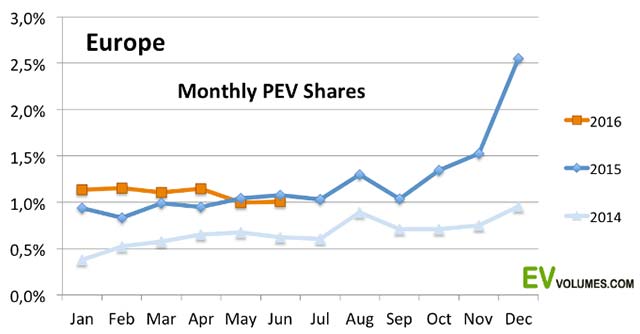 Improved range is needed for pure EVs and we can understand some of the buying hesitation in the light of what is to come from Tesla, Nissan and GM: real 200 miles (320 km) between charges. This, according to the US EPA cycle, which is more realistic than the Europe NEDC measurements.

We are unlikely to see the 2015 boom by the end of the year. If the current stagnation prevails, the estimated plug-in volume of 250 000 units for Europe is at risk.