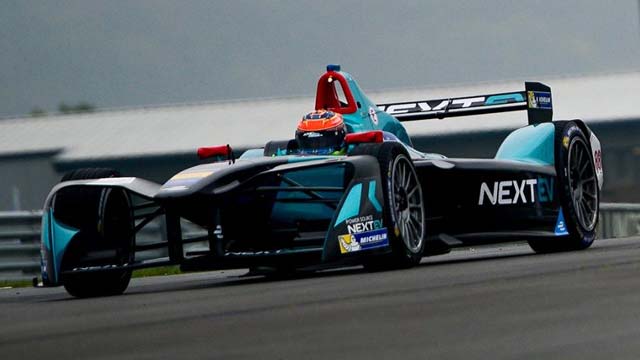 The NextEV Formula E Team has announced its driver line-up and revealed the new livery for its 2016/17 challenger.

NextEV confirmed that Nelson Piquet Jr and Oliver Turvey will remain with the team for the 2016/17 FIA Formula E Championship. The strong line-up – with both drivers extending their relationship with the team on a multi-season agreement – ensures that the NextEV Formula E Team has consistency in terms of drivers for the upcoming season. The development process for the new car has involved both Piquet Jr and Turvey, who have been a major part of the team’s private pre-season testing at Calafat in Spain.

Piquet Jr won the inaugural Formula E Drivers’ Championship in London in June 2015 for the NextEV Formula E team after scoring two race wins along the way, at Long Beach and Moscow, and podiums in Punta del Este, Buenos Aires and Monaco. It was at the season finale in the series’ maiden year that Turvey made his first appearance for the squad, impressing on his Formula E debut with two points finishes on the narrow Battersea Park street circuit. He subsequently joined Piquet Jr for a full season with the team for the 2015/16 season.

The NextEV Formula E Team’s new 2016/17 car has successfully completed 14 full days of private testing at the tight and twisty Calafat Circuit in Spain. Testing has focused on the development of the all-new NextEV 700R powertrain and set-up programmes for the season’s challenging street circuits, with the development car in the hands of Piquet Jr, Turvey and Ben Hanley.

In a related news, Daniel Abt put the Abt Schaeffler Audi Sport team at the top of the timesheets on the final of day of testing at Donington Park.

Occasional rain showers meant there was no repeat of yesterday’s record-breaking performances, and Abt’s 1:30.073 was almost half a second down on Jean-Eric Vergne’s best from day two.

Nick Heidfeld carried on Mahindra’s strong showing at Donington by setting the second fastest time, while Prost was third fastest despite his off-track excursion.

In the damp afternoon session, Jean-Eric Vergne (Techeetah) was almost a second clear of the pack after putting together a strong lap of 1:30.234 on a drying track. Sebastien Buemi and Carroll both bettered his first sector time, but fell well short of his outright pace.