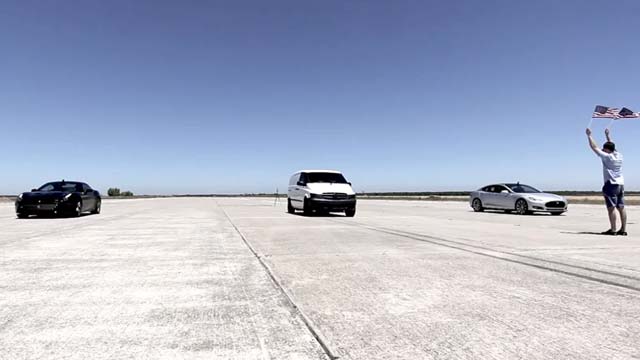 California-based electric-car startup Atieva recently raced its powertrain test vehicle named “Edna” against a Tesla and a Ferrari in a drag race.

Alongside Edna, which actually is a converted Mercedes-Benz Vito commercial van, there were a Ferrari California and a Tesla Model S lining up. Unfortunately, we don’t know the exact specs of the Tesla, but it doesn’t look like the startup used Model S P90D with Ludicrous mode for the drag race.

This is how Atieva describes its test vehicle: “Under Edna’s skin are two electric motors, two sets of power electronics, two gearboxes, one battery capable of storing 87 kWh of energy and outputting over 900 horsepower, plus all of the software to make the components play nicely together. With Edna we are able to test various aspects of the powertrain system, including motor control algorithms, regenerative braking behaviors, accelerator pedal feel, and cooling strategies, to name a few.”

Edna electric van is able to accelerate from 0 to 60 mph in 3.08 seconds. Atieva says that when mounted on the chassis and body of the final product, the ensemble will be able to reach the target speed of 60 mph even faster – 0.4 seconds faster.

Atieva, which is led on the engineering side by former Tesla VP and Model S Chief Engineer Peter Rawlinson, is working to bring a luxury electric sedan to market by 2018.

The electric-car startup has already raised significant funding and received permission to build a half-billion-dollar electric car factory in California.