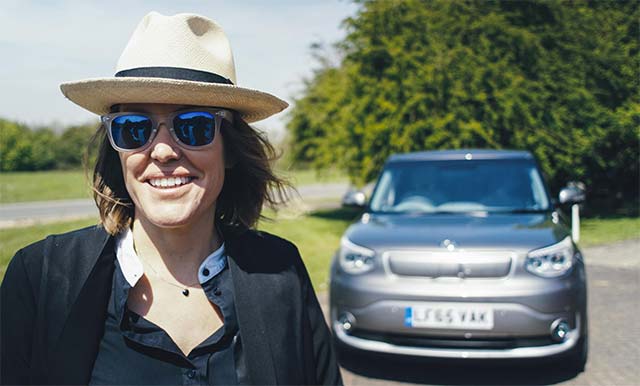 Electric cars are so refined and quiet, you can record a song in one.

Cerys Matthews’ new song Float On Down To Monte Carlo has been recorded entirely within a collection of electric cars, in an experiment designed to highlight the quiet, relaxing ride of pure electric and plug-in hybrid vehicles.

In a collaboration with the Government and automotive industry-backed Go Ultra Low campaign, the Welsh icon and her band recorded the Bossa Nova-inspired tune while on the move in four cars that were turned into mini recording studios.

This feat is uniquely achievable in pure electric vehicles – or plug-in hybrid vehicles in electric mode – because there is no engine noise, resulting in acoustics that are more conducive to recording sound.

Footage of the musicians inside the BMW 225xe, Kia Soul EV, Mitsubishi Outlander PHEV and Nissan e-NV200 Combi, was captured from sessions at Millbrook Proving Ground, Bedfordshire, and turned into a music video to accompany the song.

The video sees Cerys and her band (Mason Neely, Byron Waller and Neil Charles) undertake a ‘journey’ from noisy towns and cities to a tranquil countryside setting. The video emphasises the refined driving experience that is contributing to the rising popularity of electric vehicles with British motorists.

Cerys Matthews said: “I want my family to live a greener life, and electric cars give us the opportunity to do that. What was surprising when we drove one was that it’s actually a much more enjoyable ride for the driver and passengers, no more having to shout (or sing!) above the engine noise – it’s a more relaxing experience.

“The inspiration for the song Float On Down To Monte Carlo is the idea of being taken away from noisy and complicated everyday life to a place where you can hear yourself think and dream. I’m so keen to share the experience that I’ve hired six electric cars to ferry people to and from my ‘Good Life Festival’ in September.”

Poppy Welch, Head of Go Ultra Low, added: “A quiet, peaceful ride is one of the best things about driving an electric car. Combined with compelling financial savings and zero tailpipe emissions, it’s no wonder British motorists are turning to electric cars in record numbers.”