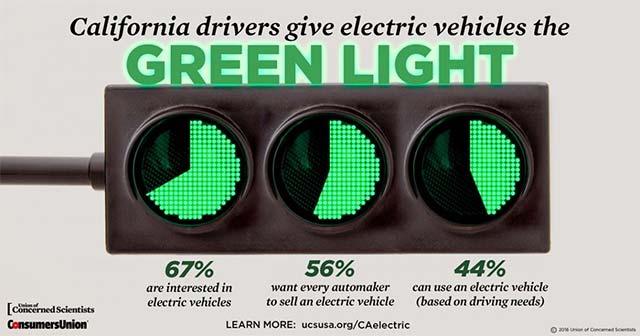 More than half of California drivers are likely to consider an electric vehicle (EV) in their next vehicle purchase or lease, and more than 65 percent are interested in electric vehicles generally, according to a new survey released by the Union of Concerned Scientists (UCS) and Consumers Union, the policy and advocacy arm of Consumer Reports.

“Many California consumers who might be looking for a new car this summer are primed and ready to purchase an electric vehicle,” said Don Anair, research and deputy director for the UCS Clean Vehicles Program. “These survey results should be encouraging news to automakers who are offering EVs or set to bring new vehicle models to market.”

Plug-in electric vehicle sales in California today represent only 3 percent of the new vehicle market, with a little over 20 vehicle models available from manufacturers. The survey shows that the electric market has real potential for bigger growth.

The survey results suggest how automakers may be able to turn interest into sales. More than 65 percent of Californians want to see automakers offer more electric options across a variety of classes, including sedans, SUVs and minivans, and over half think that every automaker should offer a plug-in model for sale.

In addition to offering greater model choices, the survey also suggests that the availability of vehicles to test drive is critical to EV sales, as 86 percent of survey respondents said they wouldn’t buy a new vehicle without test-driving it first. Without a chance to test drive the vehicles, car buyers may not get a sense for why electric vehicles have some of the highest ownership satisfaction scores in Consumer Reports’ ratings (Tesla Model S at 97%, Chevy Volt at 82%, Nissan Leaf at 76%).

The survey also found that 44 percent of California households could use an electric vehicle with little or no change to their current driving habits and vehicle needs. Survey respondents met the criteria for using a typical plug-in hybrid EV available today if they have access to parking and an electrical outlet at home, need to carry 4 or fewer passengers, and do not need hauling or towing capability.

Automakers and state officials can also do a better job of letting drivers know about existing EV incentives. More than three quarters of California drivers didn’t know the state offers any plug-in electric vehicle incentives, and almost 80 percent weren’t aware of the federal EV tax credit. Together, these programs can lower the purchase price of a plug-in vehicle by over $10,000.  Education about incentives is especially important as nearly 13 percent of respondents identified costs as a main barrier to purchasing an EV.

The survey was conducted among 1,213 randomly selected adults in California and 9 Northeast states who were licensed to drive and had driven a vehicle in the past 12 months. The survey was carried out from April 1 to April 8. The margin of error is 4 percentage points at a 95 percent confidence level for questions asked of all respondents.