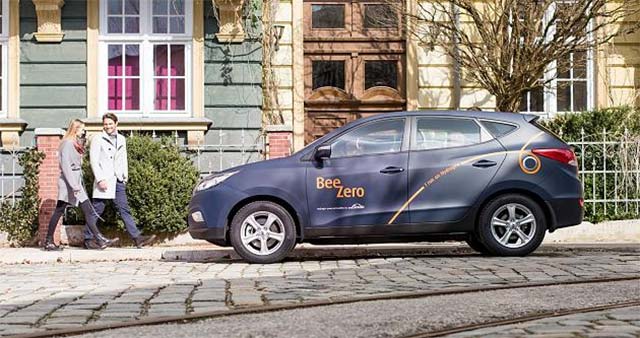 Hyundai’s ix35 Fuel Cell is the star of the world’s first fuel cell powered zero-emission carsharing service BeeZero, to be launched in Munich, Germany this summer.

BeeZero, run by a newly founded subsidiary of The Linde Group, will feature 50 Hyundai ix35 Fuel Cell electric vehicles for public use.

The BeeZero car sharing service will be run on a zone-based model. The fleet of fifty ix35 Fuel Cell cars will be available in Munich’s city centre and also in the areas of Schwabing, Haidhausen, Au and Glockenbachviertel. As with conventional carsharing services, the cars can be easily booked online or via a smartphone app.

The Hyundai ix35 Fuel Cell can travel about 600 kilometres on a single tank, making it ideal for longer journeys too, to the Bavarian lakes or the mountains for example, and not just for short trips in the city. Hydrogen fuel for BeeZero is sourced from sustainable production processes, making it completely carbon neutral.

Currently there are more than 250 Hyundai ix35 Fuel Cell SUVs on European roads in 13 countries. That is more than all FCEVs from every other manufacturer combined. And with the IONIQ, to be launched this year, Hyundai introduces the world’s first car to offer hybrid, plug-in hybrid and all-electric powertrains in a single body type.

“With our ix35 Fuel Cell electric vehicle and several hybrid and plug-in hybrid models sold around the world, Hyundai Motor has already pioneered electric powertrains,” says Thomas A. Schmid, Chief Operating Officer at Hyundai Motor Europe. “Now, with the launch of the IONIQ, we take the lead as the only car brand with hybrid, plug-in hybrid and electric as well as fuel cell vehicles in production, making low- to zero-emission cars accessible to everyone.”