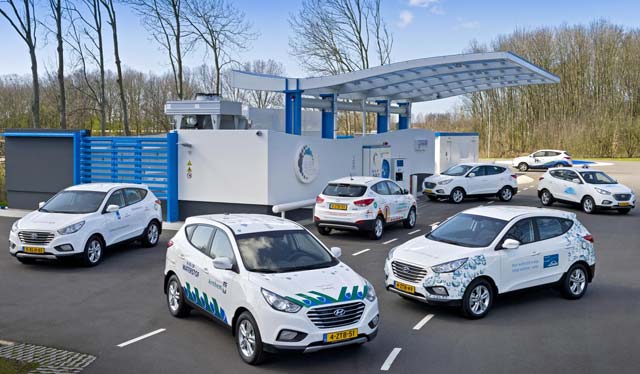 Researchers at Delft University of Technology (TU Delft) in the Netherlands successfully engineered and installed a socket on a Hyundai ix35 Fuel Cell that serves as an electrical outlet.

In close collaboration with Hyundai Motor and other commercial partners they converted the zero-emission fuel cell electric vehicle into a power plant on wheels; a European first.

“The researchers led by professor Ad van Wijk at TU Delft are the first ones in Europe who have managed to make the next big step towards a more sustainable future based on fuel cell cars as a clean source of energy,” says Frank Meijer, Head of Fuel Cell Electric Vehicle at Hyundai Motor Europe. “Fuel cell cars produce electricity, heat and clean water out of hydrogen that can be used in homes, schools and offices and we are particularly proud that the first car to provide that kind of clean energy is a Hyundai ix35 Fuel Cell.”

Professor Ad van Wijk’s research group is called Future Energy Systems and belongs to the Process & Energy department at the faculty of mechanical, maritime and materials engineering (3mE). Their work is focused on integrated system applications of the fuel cell, as for example in the programme ‘Car as Power Plant’. The idea behind: car owners use their vehicles for transportation only 5% of the time. Unlike a fossil fuel powered car, a fuel cell vehicle when parked can produce electricity from hydrogen; cleaner and more efficiently than the current electricity system and with useful ‘waste’ products heat and fresh water. 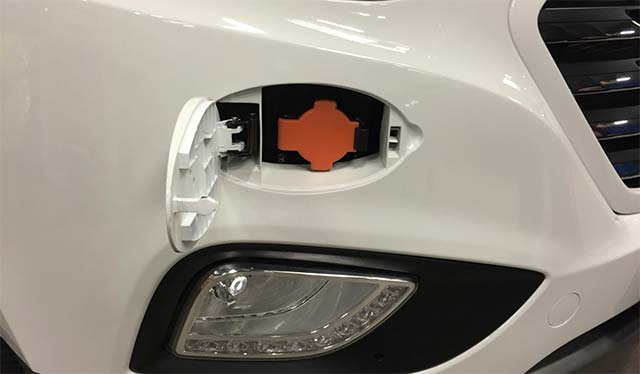 The converted Hyundai ix35 Fuel Cell has a capacity of ten kilowatt (kW), sufficient to power on average ten homes. With the socket in place the innovators managed to modify the car in such a way that it can distribute its electricity to the grid or directly to a house, for instance to complement the available wind and solar power. These applications will be researched and tested in the next stage of the programme. The project is part of the Greenvillage intiative of the TU Delft to promote innovative systems for a sustainable future.

The ix35 Fuel Cell is the world’s first mass-produced and commercially available fuel cell electric vehicle. FCEVs are not a newly developed technology for Hyundai. The ix35 Fuel Cell is already the fourth generation of FCEV, following the Santa Fe FCEV in 2000, the Tucson FCEV in 2004 and the ix35 FCEV in 2012. Currently there are more than 250 Hyundai ix35 Fuel Cell vehicles on European roads in 13 countries. That is more than all FCEVs from every other manufacturer combined.