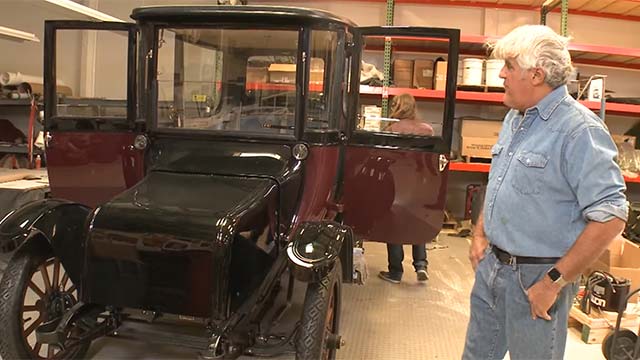 Jay Leno has been a long-time supporter of electric vehicles and his latest project is bringing a 1914 Detroit Electric car back to life using modern components.

In a process he calls “restomodding”, the 102 year-old electric car is about to get a modern electric motor and powered by the same lithium-ion battery pack used in a Nissan LEAF.

Using an ultra-modern UQM 380V motor with ten times the power of the original unit, the 1914 Detroit Electric will incorporate a Nissan LEAF battery pack, which Leno said Nissan has donated to the project.

In the early days of the auto industry, electric cars had a significant market share in the industry. In 1900, 40% of American automobiles were powered by steam, 38% by electricity, and 22% by gasoline. In 1920 the electric car drops out of commercial production and fossil fuels have won the day.

The Detroit Electric car was powered by rechargeable lead acid or nickel-iron batteries. The car had a range of 80 miles (130 km) with a top speed of 20 mph (32 km/h).