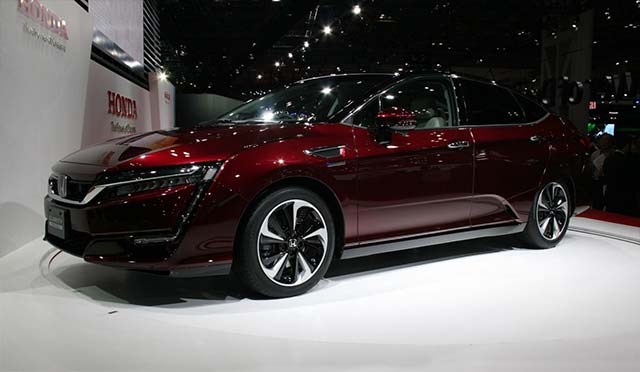 The Clarity Fuel Cell comes to U.S. shores following its world debut at the 2015 Tokyo Motor Show in October. Honda’s next-generation fuel cell car will launch in the U.S. in 2016, after its market introduction in Japan in March of next year.

The packaging of the Clarity Fuel Cell has been inspired by Honda’s principle of man maximum, machine minimum. Through minimising the space utilised by the powertrain, Honda has been able to achieve a level of interior space that allows five adults to be comfortably accommodated as would be expected in a conventionally powered sedan.

The size of the fuel cell stack and the power generation unit have been reduced through Honda’s advanced technologies to a size comparable to a V6 engine.

The Clarity Fuel Cell is equipped with a high-pressure tank capable of storing hydrogen gas at 70 MPa, increasing the mass of hydrogen that can be stored and extending the range of the vehicle. Coupled with the efficient powertrain and reduced vehicle energy consumption, the Clarity Fuel Cell achieves a best-in-class fuel cell vehicle range per full tank of over 700 km (435miles).

Engineered to use the high output of Honda’s fuel cell stack and the power assist of the lithium-ion battery pack, a high-output motor provides power to the driven wheels together with instant and powerful acceleration. Due to the continuously increasing torque provided by the high-output 130 kW (177 PS) motor with no need for gears, the Clarity Fuel Cell achieves perfectly smooth acceleration anywhere from zero to maximum speed.