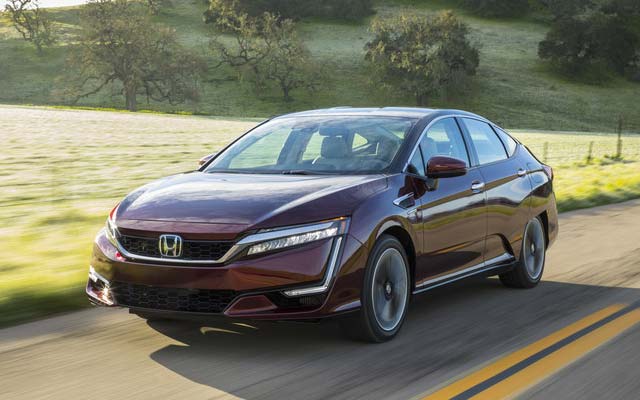 The 2020 Clarity Fuel Cell is available at an exceptionally competitive lease price of $379 per month which includes up to $15,000 of hydrogen fuel, among other benefits. At the same time, the Clarity Fuel Cell offers California customers a zero-emissions driving experience with an EPA range rating of 360 miles on a full tank of hydrogen, along with quick refueling at more than 40 stations, a $4,500 California state rebate and single-occupant HOV lane access eligibility.

In addition to the new AVAS system, the 2020 Clarity Fuel Cell includes improvements to its cold-weather starting capabilities, black-painted and heated side mirrors, and a new Crimson Pearl paint, which replaces Bordeaux Red. Inside Clarity Fuel Cell’s sophisticated and roomy interior, Platinum White models will now come standard with a brown-hued interior.

Clarity Fuel Cell comes in one very well equipped trim, which includes plenty of space for five adults, and advanced technology such as the Honda Sensing suite of safety and driver-assistive technologies, and Apple CarPlay and Android Auto integration.

With a 360-mile EPA driving range rating, Clarity Fuel Cell has one of the longest ranges of any zero-emission light-duty vehicle in America, including fuel cell and battery electric vehicles. In addition, the Clarity Fuel Cell received a 68 MPGe (miles per gallon equivalent) EPA combined fuel economy rating1, the highest rating for any light-duty fuel cell vehicle sold in America, and can be refueled in approximately three to five minutes using 70 MPa refueling stations.

The 2020 Clarity Fuel Cell is available for retail lease through a network of 12 approved Honda dealerships in select California markets, including six dealerships in Southern California (Los Angeles and Orange County areas), five in the San Francisco Bay Area, and one in the Sacramento area. The Clarity Fuel Cell leases for $379 per month for 36 months with $2,878 due at signing1, California customers may be eligible for a $4,500 rebate. The lease terms include an attractive mileage allowance of 20,000 miles per year, up to $15,000 of hydrogen fuel, up to 21 days of access to a luxury vehicle from Avis while in California, 24/7 roadside assistance, and eligibility for California’s Clean Air Vehicle Stickers to allow single-occupant HOV lane access.

Honda has invested more than $14 million in California’s hydrogen refueling network. With more than 40 retail hydrogen stations across the state, it’s now more convenient than ever before to quickly refuel the Clarity Fuel Cell.

Honda intends for electrified vehicles to comprise two-thirds of its global automobile sales by 2030. In North America, the Honda Electrification Initiative will see Honda’s electrified powertrain technologies applied to an expanding portfolio of cars and light trucks in the years ahead. Honda’s electrified vehicle lineup today includes the Clarity series, along with the Accord Hybrid, Insight, and the all-new CR-V Hybrid going on sale early next year.