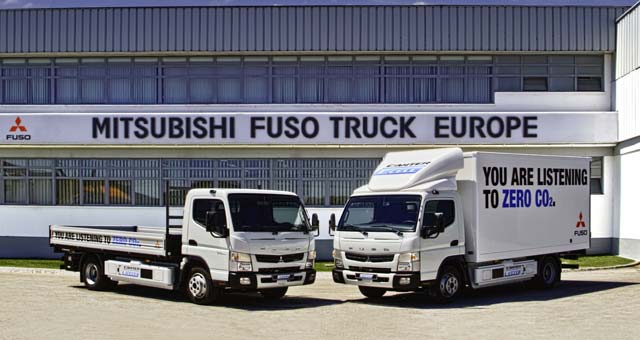 64 percent savings in operating costs – this is the gratifying result of the final analysis of data from customer field trials with eight FUSO Canter E-Cell trucks in Portugal.

Apart from the impressive savings in operating costs, the Fuso Canter E-Cell also scores points in terms of environmental aspects. No CO2 emissions at the site – reduction by 37 percent compared to diesel, taking into account the current power production in Portugal. Thus, with the pre-production version of the electric-powered Canter, Fuso is on the right track to being able to meet the demand after electric-powered trucks in urban delivery traffic.

FUSO Canter E-Cell has stood the test of daily transport routines
With a wealth of experience that spans more than 40 years, FUSO has developed the new battery-powered and locally emission-free Canter E-Cell at the Daimler Trucks Centre of Competence for Hybrid Technology. The first light-duty truck built in small-series production operates without emissions and virtually without noise. Consequently, it is predestined for use in areas that are sensitive to emissions and noise such as city centres, parks and pedestrian zones.

To prove this practicality of the Canter E-Cell, FUSO sent eight vehicles of the electrically powered Canter on a field trial in mid-2014. All eight vehicles travelled the roads of Portugal and were permanently monitored and analysed during the one-year field trial. The Canter E-Cell trucks were equipped with platforms and box bodies. They were operated by couriers and freight forwarding agents as well as by municipalities and public works departments.

On average, the electric Canter trucks travelled 50 kilometres a day, but ranges of up to 109 kilometres were achieved in practice. All in all, the eight vehicles travelled 51,500 kilometres without any problems. The most used Canter E-Cell was in service with “Transporta” parcel service company and completed a distance of over 14,000 kilometres during the one-year trial.

The range of the lithium-ion batteries stabilised at 100 km per charge. Charging the batteries on a 230-volt outlet takes about seven hours. That time is cut to just one hour on a quick charging system.

Savings in operating costs of up to 64 percent
Calculated on the basis of today’s cost of diesel fuel and electricity in Portugal, the trial produced savings in operating costs of up to 64 percent compared with a conventional diesel truck. In practical terms, this means a Canter diesel truck burns about 14.08 litres of diesel fuel over a distance of 100 kilometres, depending on set-up and freight, while the FUSO Canter E-Cell consumes 47.6 kWh of electricity over the same distance. The amount of savings will therefore differ depending on the costs of diesel and electricity in a particular country.

From municipalities and the postal service to parcel service companies
The customers experienced the Canter E-Cell as a strong and reliable concept that fully lives up to the requirements of urban delivery transport. The capabilities of the electric light-duty truck were tested under a wide range of conditions. The City of Lisbon used the Canter E-Cell for the disposal of vegetation and waste, the City of Porto used it as a collection vehicle for recyclables, the City of Sintra for forest management and the cities of Abrantes and Cascais likewise for landscape maintenance. Transporta parcel service used the vehicle for door-to-door deliveries to households, energy supplier REN for transport purposes within the industrial gas depots in the cities of Sines and Pombal. Finally, the Canter E-Cell also assisted the Portuguese postal service CTT with transport operations between the distribution centres of Lisbon and Coimbras.

The results of the practical tests show that the eight vehicles stood the test of daily use in short-distance delivery and city centre transport. With operating ranges of more than 100 kilometres, the Canter E-Cell trucks surpassed the average distance that many trucks used in light-duty distribution transport travel each day.

From the outside, the FUSO Canter E-Cell is only distinguished from its diesel-powered or diesel-electric powered brethren by the battery packs mounted to the two sides of the frame. An electric powertrain takes the place of the three-litre diesel engine behind the unchanged Canter cab. The permanent magnet motor sends 110 kilowatts (150 hp) of power to the rear axle via a one-speed transmission.

The chassis frame is approved for a total weight of six tonnes. The wheelbase of 4300 millimetres offers space for bodies up to 4.40 metres in length, the weight of which must be subtracted from the chassis load-bearing capacity of three tonnes. The remaining payload of a little over two tonnes is more than adequate for most transports in urban distribution operations.

To prevent the Canter E-Cell’s silent rolling from creating hazards, the trucks are fitted with the acoustic VSP warning system (vehicle sound for pedestrians), which can be activated at the push of a button.

The electric Canter has been advanced continuously, starting with the first prototype on display at the IAA 2010. Today, it produces a rated output of 110 kW (150 hp) and a peak torque of 650 Nm from four lithium-ion battery packs with a formidable capacity of 48.4 kWh.