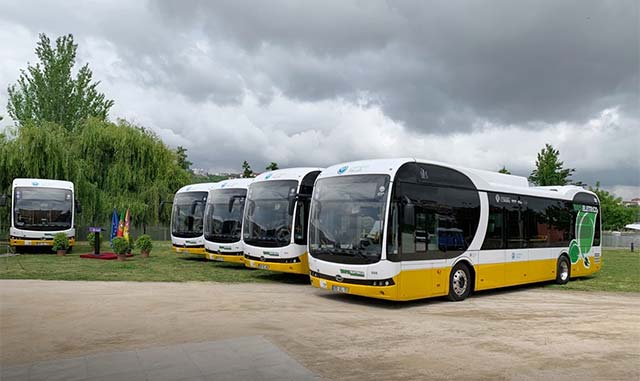 BYD – the world’s leading electric bus manufacturer – has received orders for its best-selling 12-metre electric bus model from Public Transport Operators (PTOs) in Spain and Portugal, further strengthening its position as the preferred electric bus supplier for a number of major PTOs across the Iberian Peninsula.

BYD has received a new order for two 12-metre electric buses from Transportes Urbanos de Santander (TUS) – the first ever electric buses for northern Spain’s coastal city of Santander. BYD is now present in towns and cities throughout the Iberian Peninsula, with over 80 electric buses currently in service, collectively clocking-up over 5 million zero-emission kilometres and off-setting 5,000 tonnes in CO2 emissions. Further afield, BYD now has 2,000 pure-electric vehicles either delivered or on order with Local Authorities and PTOs throughout Europe.

Meanwhile, BYD has recently received an order additional five pure-electric, 100% emissions-free, 12-metre BYD electric buses by the Coimbra Municipal Transportation Service (SMTUC) in Portugal scheduled for delivery before the end of this year, after eight vehicles were supplied into the Portuguese PTO in 2019. The repeat order comes following excellent in-service experience, with the existing BYD fleet meeting the demands of Coimbra’s challenging route profiles.

With coronavirus restrictions beginning to ease, and with passenger demand expected to increase steadily, BYD is delighted to be partnering both SMTUC and TUS as they both begin to supply pure-electric, sustainable, transport solutions for the people of Coimbra and Santander. BYD has continued to support PTOs during the pandemic, and has also successfully completed all electric bus deliveries despite Europe-wide restrictions and supply chain interruptions.

Mrs Gema Igual, Mayor of Santander said, “Several tests with electric vehicles have been carried out in Santander to evaluate the potential of this technology. We can already say we’re prepared for their introduction and look forward to them joining the fleet.”

“The acquisition of these new electric buses is part of the TUS (Santander Urban Transport Service) fleet renewal plan, which will incorporate new buses every year until 2030. We continue to modernise municipal urban transport to achieve services that are increasingly sustainable and committed to the environment with models that provide more advanced technology, contribute to the fight against climate change and improve safety.”

Isbrand Ho, Managing Director at BYD Europe, added, “We’re proud to have been entrusted with the supply of the first ever electric buses to TUS for the beautiful city of Santander, and with a second order from SMTUC to Coimbra. It is fitting that two cities of such historical importance should be respected with completely clean, noise-free public transport.

“People want clean transport – a sustainable future,” he said, “and BYD has the solution with our 100% emissions-free, pure-electric range of buses and coaches.”