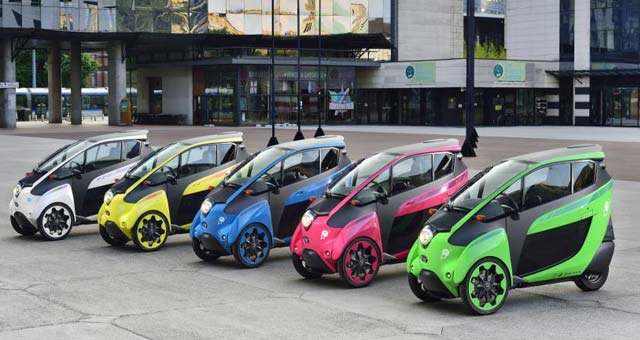 Starting next month, Park24 Co., Ltd. and Toyota Motor Corporation will expand the scope and scale of their joint car sharing service trial in central Tokyo.

In addition to continuing to use the Toyota i-Road, the service will now also make use of the COMS, a super-compact electric vehicle produced by Toyota Auto Body. A number of new locations have been added throughout central Tokyo, and the service’s vehicle management system has been overhauled with several user-friendly updates. This phase of the trial is planned to run from October 20 through to the end of March 2016.

The new trial will make use of findings from the previous joint trial conducted from April to September of this year. As before, the service will incorporate elements of Toyota’s low-carbon transport system, Ha:mo, and vehicles can be reserved through Park24’s Times Car Plus service, which allows members to use share cars at any time of day or night.

Together with the wider range of vehicles and pick-up and drop-off stations, this phase will focus on improving user-friendliness by addressing specific issues, such as procedures for boarding the vehicles.

The goal is to assess the service’s ease of use with a view to meeting a wide variety of customer needs. This includes use for business, direct transportation to destinations such as commercial facilities, and integration with public transportation networks.

In addition to the five available i-Road vehicles, 25 COMS vehicles will be added to the lineup to allow users to select the vehicle most suited to their tastes and needs. Based on the results of feedback from user surveys, around 30 locations will be selected as pick-up and drop-off stations from hourly pay parking lots operated by Park24.

In particular, the expansion will be centered on major railway stations such as Tokyo, Nihonbashi, Yurakucho, Hibiya, Ginza, Toyosu, Ariake, Odaiba, Monzen-nakacho, and Kiba. The project will be conducted on a one-way basis, meaning that it will be possible to pick up the vehicles from any participating station and drop them off at any participating station going in either direction.

The stations will take advantage of the compact size of the vehicles by making surplus space available within parking lots on an experimental basis. In addition, the trial will encompass the usage of links between railway stations and facilities pegged as likely destinations, as well as optimal location for stations with recharging capability.

In addition to the increased number of vehicles and stations, COMS vehicles will now be available not only to corporate and selected individual Times Car Plus members, but to all individual members.

In this trial, an updated vehicle management system developed by Toyota for Ha:mo will be used. Instead of a membership card, users with smartphones that support Bluetooth Low Energy (BLE) beacon functionality can touch their smartphone to the vehicle to lock and unlock the vehicle.

Park24 and Toyota believe that this trial will aid in the construction of a new urban transportation network.