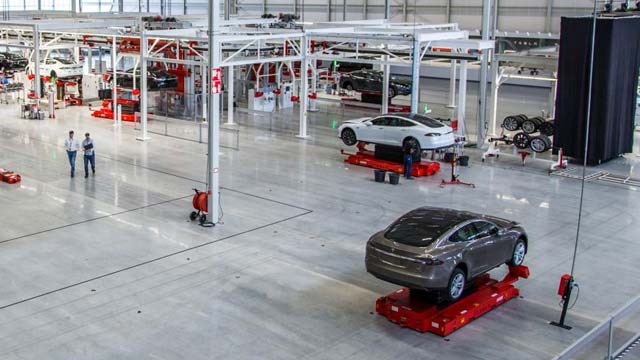 Tesla has opened its first factory in Europe in an attempt to ramp up sales in the continent and realize its goal of producing half a million cars a year globally by 2020.

Tesla says it will now assemble its Model S sedan in the new factory in Tilburg, in the Netherlands, which will “help European customers get cars faster”.

The plant is the first fully-fledged Tesla factory outside its home market. It was built using old factory parts from the company’s main factory in Fremont, California. The plant will produce about 450 cars a week, with capacity for about 1,000 a week.

The Tilburg factory, where cars are pulled around a sparkling white floor on futuristic magnetic strips, features a 750m indoor test track.

Although the cars won’t be manufactured in Tilburg, the battery pack, power train and rear axle will be installed there, coming from the firm’s HQ in Fremont, California. The car’s first firmware upload will also be carried out on site, before each car undergoes a rigorous quality control assessment. The upcoming Model X electric SUV will also be built in Tilburg.

The company, which previously used the Tilburg site to reassemble cars made in California, has so far made only limited inroads into the key European markets of Germany, France and Spain. Its main successes so far have come in the Nordic region, particularly in Norway, which is estimated to be 13 per cent of sales.