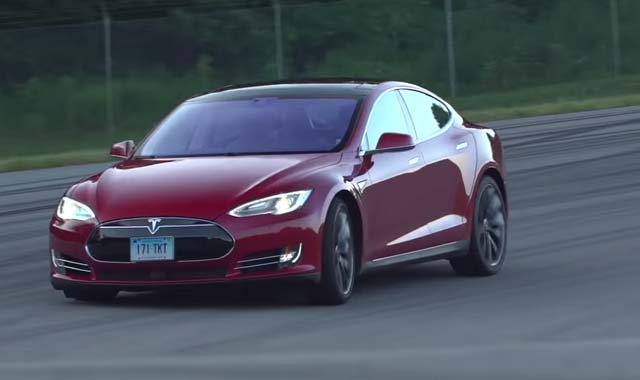 Consumer Reports gave the new, high-performance Model S P85D version a 103-point score — out of a possible 100—calling it “the best-performing car that agency has ever tested.”

The not-for-profit product testing agency said it had to make changes to its scoring methodology to account for the car’s exceptionally strong performance. With those changes now in place, Tesla’s scale-bending 103 points once again fit within the magazine’s 100-point top rating.

“It really blew up our system,” said Jake Fisher, the head of automotive testing for Consumer Reports. “It actually scored above 100 in our system before we had to make some changes to account for this car.”

The glowing review comes just two years after Consumer Reports gave the base model version of the Model S a near perfect score of 99 out of 100. At the time, that was the highest rating ever for a vehicle.

The Model S P85D comes with a 85 kWh battery that can be upgraded to 90 kWh. The P85D can go 253 miles between charges and hit 60 miles per hour in 3.1 seconds. Consumer Reports couldn’t match that speed, saying its test car clocked zero to 60 mph in 3.5 seconds. There are other cars on the market that are faster, but Consumer Reports notes that because the P85D achieved these speeds while still being “ridiculously energy efficient” it earned itself the top score.

Despite its score, Fisher said, the P85D was not perfect. Its interior materials weren’t as sumptuous as those in some other luxury cars.

Planning road trips around charging stops can be complicated, despite Tesla’s network of Superchargers. And the automaker doesn’t have a long-term track record for reliability. It has been prone to problems like the one that Consumer Reports experienced with the door handle.