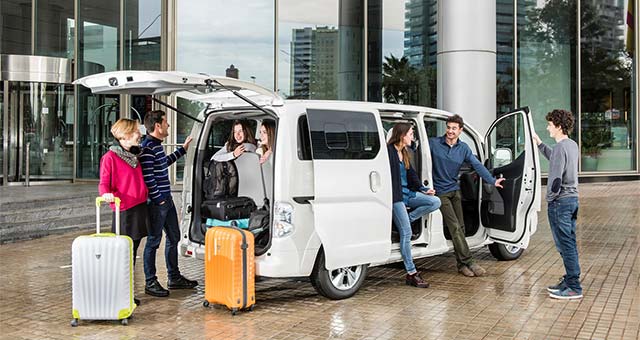 Robert Llewellyn recently spent some time around the less glamorous outskirts of Paris in the recently released Nissan e-NV200 Evalia.

The e-NV200 Evalia – the world’s first all-electric production vehicle to offer seating for seven adults – is being introduced in response to huge interest from fleet operators and larger families keen to capitalise on the market-leading e-NV200’s low running and maintenance costs and zero emissions performance.

The Nissan e-NV200 Evalia is priced at £19,895 (incorporating the Government Plug-In Car Grant) for those choosing the convenience of the Nissan Flex battery leasing option with monthly battery rental starting at £73.20 per month, and from £23,400 (inc PiCG) for those purchasing outright.

Total cost of ownership is estimated to be £2,500 lower than a conventional diesel over three years.

Like the 5-seat Nissan e-NV200 minivan and e-NV200 cargo van on which it is based, the 7-seat e-NV200 evalia is powered by the same 80 kilowatt electric motor found in the Nissan LEAF. It also uses the same 24 kilowatt-hour lithium-ion battery pack as the LEAF, combining to offer an NEDC-rated range of 106 miles per charge and a real-world achievable range of between 60 and 80 miles, dependent on conditions and driving style. It can be charged from zero to 80% full in as little as 30 minutes.