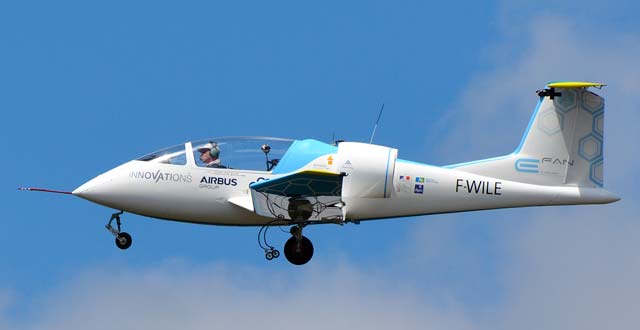 The Airbus E-Fan — a light all-electric aircraft powered by lithium-ion batteries and two electric motors — has successfully completed its crossing of the English Channel.

From takeoff at England’s Lydd Airport to touchdown at Calais-Dunkerque Airport in France, 74 kilometres away, the all-electric E-Fan demonstrator performed its crossing in 38 minutes.

The Airbus e-Fan operates exclusively on lithium-ion batteries and can reach top speeds of 220 km/h. Since there’s no oil or water, the six-metre-long, 600-kilogram aircraft releases zero emissions.

”It’s closer than a glider. Of course, there is a little bit of noise, but less than any other aeroplane first and also, there is no vibration at all. It’s smooth and it’s very quiet. That’s very important. It’s a pleasure to fly this plane,” said Airbus test pilot Didier Esteyne.

Developed in a program coordinated by Airbus Group Innovations – the company’s corporate-level research and technology network – and integrated at Royan, France-based Aero Composites Saintonge, the fully-electric E-Fan demonstrator benefitted from an intense development program that involved a range of partners and suppliers.

Airbus plans to put an updated version of the aircraft into production as soon as 2017. That model will be a side-by-side two-seater (as opposed to the current model’s tandem configuration) followed by a four-seater later on.