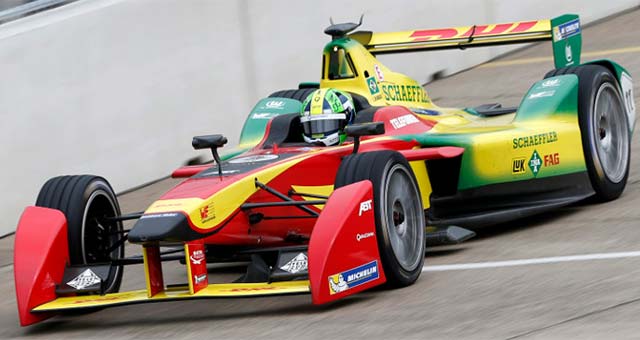 Race winner Lucas di Grassi has been excluded from the DHL Berlin ePrix after his Audi Sport ABT car was found to have been running with a modified front wing.

The race-winning car failed post-race scrutineering where it was discovered that the front wing fairings had been modified to include internal metal reinforcing rods. In addition the stewards found that six of the eight holes in the front wing had been sealed.

The remaining two holes were found to have had helicoil inserts and chamfers made and that the front flap and gurney LH 220 has a filler layer added and chamfer made.

The team argued that these changes were made as a result of repairs and that they offered no competitive advantage, however, they were deemed to be in breach of Article 3.1 of 2014/2015 FIA Formula E Technical Regulations and the exclusion was made.

Audi Sport ABT has decided not to appeal the decision.

The decision means that Jerome D’Ambrosio is now the winner of the race and Nelson Piquet Jr is now in the lead of the championship, 10 points ahead of di Grassi.