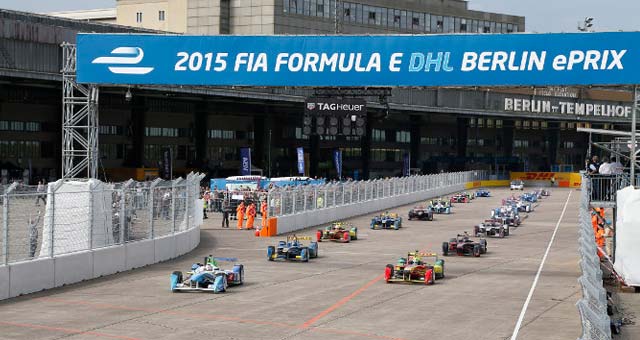 In contrast to his Beijing ePrix win where he led for just the final few hundred metres, in the DHL Berlin ePrix it took him just a few hundred metres to take a lead that – pitstop period aside – he dominated from the front.

Di Grassi took full advantage of a mistake by poleman Jarno Trulli to slide his Audi Sport ABT entry into the lead through Turn 3 of the opening lap. By the end of that tour he led by almost two seconds, by the end of lap two it was 4.5s!

With Trulli’s car consuming energy at an alarming rate, the Italian was forced to adjust his pace accordingly. This resulted in the rest of the field queuing up behind him. Sebastien Buemi led the charge, finally using his FanBoost – the first time the e.dams-Renault driver had won the vote – to take second place.

This opened the flood gates as the struggling Trulli was powerless to stop the onslaught. However, by now di Grassi was 10 seconds up the road and already thinking about pacing himself as the car-change pitstops approached.

Having taken advantage of Daniel Abt’s spin into Turn 2 on the opening lap, the charging Jerome D’Ambrosio had worked his Dragon Racing car into third by the time the majority of the field pitted to jump into their second cars.

A slick pitstop – hitting the 63-second minimum time on the head – took him ahead of Buemi and into second. He ultimately reduced di Grassi’s winning advantage to 7.5 seconds, but he knew that the game was up when the Brazilian had slipped by Trulli so early on.

But things couldn’t have been very different for di Grassi as his car went into error mode just seconds after he crossed the line. It meant his victory lap was completed on a tow rope, but that could not dampen his spirits as he extended his points lead to 17 over Nelson Piquet Jr.

Despite lacking the pace he showed on his way to victory in Monaco, Buemi was satisfied with third and is confident of a return to form as the series hits Moscow on June 6, although he is now 20 points down on di Grassi.

Having started back in 13th, Piquet made ground when Abt spun and used his FanBoost to quickly work his way into the top 10. Once again he consumed his energy sparingly and he and NEXTEV team-mate Charles Pic were able to pit a lap later than their rivals.

Piquet resumed from the stops in eighth, but that quickly became seventh when Amlin Aguri’s Antonio Felix da Costa was penalised for not adhering to the pitstop time.

With more energy to hand than the cars ahead, Piquet battled his way by the Venturi drivers and was locked in a tight battle with Loic Duval that ran right to the finish. Duval made it the best race so far for Dragon by taking fourth, while fifth place plus two points for the Visa Fastest Lap was a good recovery for Piquet after an unexpectedly poor qualifying.