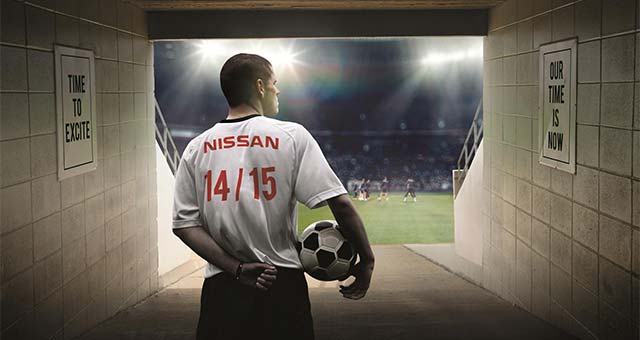 As a worldwide leader in electric vehicles, Nissan will be putting electric at the heart of its UEFA Champions League Final activity on June 6, 2015.

As part of its innovative partnership with Europe’s most prestigious football competition, Nissan aims to enrich the fans’ experience of the tournament and leave a lasting legacy for the people of Berlin.

As the official automotive partner of the UEFA Champions League and producer of the biggest selling electric vehicle in the world, Nissan will be supplying over 100 electric vehicles to UEFA and associated sponsors to transport guests and officials in the build-up to the Final in Berlin.

To further support this, Nissan is installing 129 electric car charging stations around Tegel International Airport, various Berlin hotels and the Olympia stadion, several of which will remain as a lasting legacy for the city.

Bastien Schupp, Vice President, Marketing – Nissan Europe said: “The Final in Berlin will mark the climax of year one of Nissan’s partnership with the UEFA Champions League. The partnership has enabled us to highlight our commitment to EV and bring to life our brand values of Innovation and Excitement. I’m especially pleased that the great relationship we have with UEFA has enabled us to do something lasting and positive for the people of Berlin with the installation of more EV charging points, adding to Nissan’s network, which is already the biggest in Europe.”

In Berlin from 3-7 June, Nissan will also be hosting interactive fan experiences at the UEFA Champions Festival. Attending fans will have the chance to play 2×2 in the interactive Football Cage, test their skills in the Nissan Performance Maze and recreate moments of genius by Nissan ambassadors in the Test Area.

The energy created at UEFA Champions Festival by fans will be converted into an equivalent amount of kilowatts and harnessed to help power the UEFA Champions League trophy to the Final at the Olympiastadion. Participants generating the most kilowatts will receive tickets to the Final as well as an exclusive opportunity to accompany the trophy on its journey from the UEFA Champions Festival to the Stadium in a specially designed Nissan e-NV200 all-electric van on match day as part of the UEFA Trophy Parade.

Footballing legend Marco van Basten will be joining Nissan as an ambassador to support its UEFA Champions League Final activity. Having won the tournament twice during his distinguished career, Marco shared his thoughts on Nissan’s fan experiences: “It’s fantastic that Nissan is keeping football fans at the core of their celebrations around the UEFA Champions League. There are some great activities and games involving the fans, and it will really help to add to the electrifying atmosphere around the Final.”

Throughout its first season as UEFA Champions League partners, Nissan has worked with UEFA to develop a series of engaging fan activities including the UEFA Champions League Goal of the Week competition as well as giving fans and partners access to exclusive away-team training sessions the day before the match.

Nissan is the official global automotive sponsor of the UEFA Super Cup and UEFA Champions League, with a deal that will cover the period 2014/2015 to 2017/2018. As an official partner Nissan will be involved with Europe’s most prestigious club football competition through a number of its exclusive products and services.

– These will add to the 1400+ quick charging points Nissan has already installed across Europe – the most of any brand.