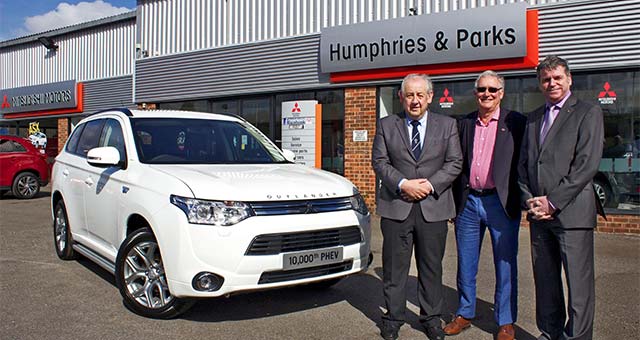 Mitsubishi Motors UK has reached a significant milestone after selling its 10,000th Outlander PHEV in the UK in its first year.

The landmark handover took place at the Humphries & Parks Mitsubishi dealership in West Malling, Kent, with Paul Aspin, of Sittingbourne, being handed the keys by Lance Bradley, Managing Director of Mitsubishi Motors (UK).

The award-winning Outlander PHEV is transforming the plug-in sector. Launched in April 2014, it has now overtaken every other plug-in hybrid and pure electric car, even passing vehicles that have been on sale since 2011, such as the Nissan Leaf, to become the UK’s favourite plug-in vehicle.

Paul, a retired Director of Marketing for IBM Europe, said: ‘It’s a fantastic vehicle and I’m happy to be the 10,000th customer. The Outlander PHEV ticks all the boxes for me. It’s great to drive, it’s comfortable, economical and it’s good for the environment. It’s got lots of clever technology but you don’t need to be a tech expert to use it.’

It’s not difficult to see why the Outlander PHEV is proving so popular. It boasts impressive fuel economy and ultra-low emissions – all in a vehicle with the go-anywhere ability of a four-wheel-drive. This makes it ideal for motorists keen on doing their bit for the environment as well as saving lots of money on running costs.

Combining electric and petrol power, it can travel 32½ miles in electric mode alone – more than enough to accommodate the average daily commute.

Lance said: ‘To sell 10,000 Outlander PHEVs between June and the end of March was a challenge set by our colleagues in Japan – given the market for plug-in hybrid vehicles in 2013 was 980 it seemed like a very big challenge. But the reaction to the vehicle has been fantastic and that is because it’s a car without compromise.

‘People want to be environmentally responsible but they still want to have a car that is great to drive and doesn’t cost significantly more than equivalent traditional petrol or diesel powered car. Paul’s car is the 10,000th so we are absolutely delighted.’

Marcus Joy, Dealer Principal at the London Road showroom, said: ‘This is the 92nd PHEV we have sold and we are delighted it’s the 10,000th for Mitsubishi Motors (UK). The Outlander PHEV has been a fantastic success for us and it’s definitely created a halo around the brand, enabling us to sell more of the other products in the range, which can only be good for everyone in the network.’

As well as its official fuel consumption figure of 148 miles per gallon, the Outlander PHEV’s low emissions of just 44g of CO2 per kilometre mean there’s no vehicle tax to pay plus it’s exempt from the London congestion charge and it qualifies for the government’s £5,000 Plug-in Car Grant too. In addition, company car drivers can reap the reward of a

What’s more, for business owners there are savings on National Insurance contributions to be had, and the Outlander PHEV plug-in hybrid qualifies for 100 per cent First Year Allowance against business profits.