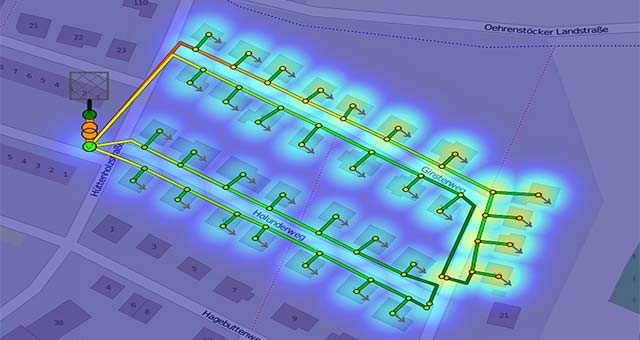 The success of electric vehicle networks depends on economical vehicles – and efficient power grids. Existing power lines were not designed for the loads generated by electric vehicles.

Fraunhofer researchers have developed prototype software to show grid operators how many electric vehicles can be connected to their local grid.

The rising number of electric vehicles on the road is putting grid operators under pressure. Low voltage networks for domestic consumers are not designed for the kind of loads that are generated by recharging electric vehicles at home.

“A vehicle draws up to 22 KW of power. So if you have multiple vehicles plugged in at the same time, then current grids quickly reach their limits,” says Dr. Michael Agsten from the Advanced System Technology (AST) department at the Ilmenau site of the Fraunhofer Institute of Optronics, System Technologies and Image Exploitation IOSB. Together with his team of researchers, Agsten has developed a software program that shows grid operators how much load their low voltage network can handle. This enables them to draw conclusions on how many electric vehicles can be connected to the grid without pushing it to its limits. Grid operators can then plan in advance and find answers to key questions. For example: how will connecting one more vehicle affect the load distribution? At what point should we invest in our networks to ensure we maintain enough capacity? Is it better to spend money on new copper cables or invest in smart charge spots? A prototype of the software program has already been created as part of the “Managed Charging 3.0” project sponsored by the German Federal Ministry for the Environment, Nature Conservation, Building and Nuclear Safety (BMUB). “The IT platform is already running very smoothly in the laboratory with test data. In the next stage we’re hoping to analyze real distribution grids,” says Agsten.

Fast random sampling
The software shows how many charging processes can run simultaneously without hitting the limits set by statutory requirements or by the grid operator. Each electricity substation typically supplies power to 150 or more households.

“It’s impossible to calculate that in the time available,” Agsten explains. The researchers therefore decided to simulate their model using the Monte Carlo method, a form of stochastic modeling. The aim is to produce a group of combinations that is as heterogeneous as possible. The number of these combinations is significantly smaller than the total number of all possible combinations. “It’s far quicker to analyze somewhere between 1,000 and 10,000 cases, and that still gives you a very good approximate value,” says Agsten.

In a matter of seconds the software program shows the degree of overload risk and how many electric vehicles can be charged simultaneously in a local grid.

Distribution grid operators can use these figures to protect their power grids from long-term damage and sudden outages. In Germany there are around 560,000 local grids which are divided among approximately 800 grid operators. Each operator is responsible for the reliable and stable operation of their distribution networks and local grids and is required to meet demand by carrying out measures such as smart management and grid expansion where necessary.

These companies do not have enough personnel to manually calculate how many electric vehicles can safely be connected to each individual distribution network. Even if they did, the cost would be prohibitive. It took relatively little time to calculate how many household appliances such as washing machines, ovens, televisions and computers could be connected simultaneously before limits were reached. And in fact the standard upper limit of up to 44 KW/63A per household has only been tested in exceptional cases. But nobody figured in the power required to charge electric vehicles.

“Charging electric vehicles leads to a significantly higher household power draw – and the problem is exacerbated if people charge multiple vehicles at home at different times of the day,” says Agsten. Key parameters such as voltage stability, component thermal load and voltage imbalance fluctuate constantly based on the changing volatile load of electric vehicles according to time and place. Each time another electric vehicle is plugged in, this increases the number of possible combinations of simultaneous charging situations distributed geographically and over time. The current processes used for testing and installation are unable to take all the local boundary conditions into account. “As the power draw continues to steadily increase, network operators will need to know as early as possible how much room they still have for maneuver. Otherwise they won’t know that the limits have been reached until their customers actually start reporting problems,” says Agsten.

The platform developed by Fraunhofer IOSB is designed to tackle the low voltage network, which is the lowest level of the electrical transmission and distribution grid. It uses a series of stages in the grid to connect the plug sockets in people’s houses with the high and extra high voltage networks. These higher levels of the grid will be drawing on an increasing proportion of fluctuating renewable energy sources in the future. Electric vehicles could help balance out these fluctuations because they can also be used to store energy. “But that will work only if the power grid lets them connect in the first place!” Agsten notes.