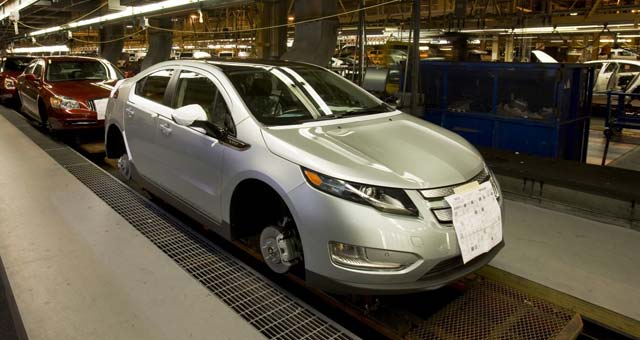 GM will stop production of the slow-selling 2015 Chevrolet Volt for six weeks starting next month next month as it prepares to launch the second-generation version of the plug-in hybrid.

A production stoppage will give GM time to retool the Detroit-Hamtramck plant for the new 2016 Volt model.

GM has sold about 70,000 Volts since its introduction in late 2010— far below initial company forecasts.

The production hiatus comes after a first quarter in which sales fell well behind Nissan’s Leaf electric car in the U.S. GM sold 1,874 Volts during the three-month period, in contrast to Nissan’s 4,085 Leaf sales. At the current sales pace, there’s enough inventory in the GM’s distribution system to last until November. For the automakers, around 60 days is the optimal period when they hold the inventory of vehicles.

The 2016 Volt offers an estimated 50 miles of EV range, and a total driving range of more than 400 miles between fill-ups. With regular charging, owners are expected to travel more than 1,000 miles on average between gas fill-ups. This is based on GM-estimated fuel efficiency of 41 MPG and 401 MPGe, a measure of the average distance traveled per unit of energy consumed.